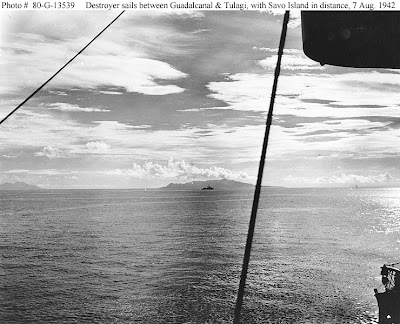 
In the six months between August 1942 and February 1943, the United States and its Pacific Allies fought a brutally hard air-sea-land campaign against the Japanese for possession of the previously-obscure island of Guadalcanal. The Allies' first major offensive action of the Pacific War, the contest began as a risky enterprise since Japan still maintained a significant naval superiority in the Pacific ocean.

Nevertheless, the U.S. First Marine Division landed on 7 August 1942 to seize a nearly-complete airfield at Guadalcanal's Lunga Point and an anchorage at nearby Tulagi, bounding a picturesque body of water that would soon be named "Iron Bottom Sound". Action ashore went well, and Japan's initial aerial response was costly and unproductive. However, only two days after the landings, the U.S. and Australian navies were handed a serious defeat in the Battle of Savo Island. 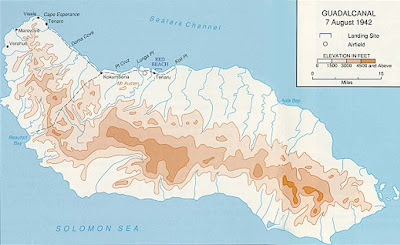 A lengthy struggle followed, with its focus the Lunga Point airfield, renamed Henderson Field. Though regularly bombed and shelled by the enemy, Henderson Field's planes were still able to fly, ensuring that Japanese efforts to build and maintain ground forces on Guadalcanal were prohibitively expensive. Ashore, there was hard fighting in a miserable climate, with U.S. Marines and Soldiers, aided by local people and a few colonial authorities, demonstrating the fatal weaknesses of Japanese ground combat doctrine when confronted by determined and well-trained opponents who possessed superior firepower.

At sea, the campaign featured two major battles between aircraft carriers that were more costly to the Americans than to the Japanese, and many submarine and air-sea actions that gave the Allies an advantage. Inside and just outside Iron Bottom Sound, five significant surface battles and several skirmishes convincingly proved just how superior Japan's navy then was in night gunfire and torpedo combat. With all this, the campaign's outcome was very much in doubt for nearly four months and was not certain until the Japanese completed a stealthy evacuation of their surviving ground troops in the early hours of 8 February 1943.

At the end of the old Victory at Sea episode the narration compares the Marines on Guadalcanal to the Greeks at Thermopylae, the English at Waterloo.


The Marines turned the tide of war and stopped their enemy. The Japanese will advance no further. And, as the surviving Marines wave goodbye, one of the greatest tales of heroism slips out of focus - into history. For these men go the honors accorded to the Greeks at Thermopylae, the Colonials at Valley Forge, the British at Waterloo and, now, the Americans at Guadalcanal.

And what of the American Navy? It began badly as Japanese land-based aircraft ripped into the shipboard logistics train followed by a sea battle that shook the fleet:


The long fight for Guadalcanal formally opened shortly after 6AM on 7 August 1942, when the heavy cruiser Quincy began bombarding Japanese positions near Lunga Point.

In the darkness a few hours earlier, what was for mid-1942 an impressive invasion force had steamed past Savo Island to enter the sound between the two objective areas: Guadalcanal to the south and, less than twenty miles away, Tulagi to the north. These thirteen big transports (AP), six large cargo ships (AK) and four small high-speed transports (APD) carried some 19,000 U.S. Marines. They were directly protected by eight cruisers (three of them Australian), fifteen destroyers and five high-speed minesweepers (DMS).

Led by Rear Admiral Richmond Kelly Turner, this armada was supported from out at sea by three aircraft carriers, accompanied by a battleship, six cruisers, sixteen destroyers and five oilers under the command of Vice Admiral Frank Jack Fletcher, who was also entrusted with the overall responsibility for the operation.

The great majority of these ships (9 AP, 6 AK and most of the escort and bombardment ships), with Marine Major General Alexander A. Vandegrift and the bulk of his Leathernecks, was to assault Guadalcanal a few miles east of Lunga Point. Tactically, this part of the landing went very well. There were few enemy combat troops present, and these were some distance away. The first of the Marines came ashore soon after 9AM at "Red" Beach, a stretch of grey sand near the Tenaru River. By the afternoon of the following day they had pushed westwards to seize the operation's primary object, the nearly completed Japanese airfield near Lunga Point. The surviving Japanese, mainly consisting of labor troops, quickly retreated up the coast and inland, leaving the Marines with a bounty of captured materiel, much of which would soon prove very useful to its new owners.

While the Marines consolidated their beachhead and began to establish a defensive perimeter around the airstrip, the landing of their supplies and equipment proceeded less well. Typically for these early amphibious operations, arrangements were inadequate to handle the glut of things brought ashore by landing craft. Mounds of supplies soon clogged the beaches, slowing the unloading of the ships offshore. A series of Japanese air attacks, which forced the ships to get underway to evade them, didn't help, and when the catastrophic outcome to the Battle of Savo Island and the withdrawal of Vice Admiral Fletcher's carriers forced the the big transports and cargo ships to leave on 9 August, none of them had been completely unloaded. Though the Marines had taken their objective, supply shortages would plague them in the coming weeks, as the Japanese hit back by air, sea and land in an increasingly furious effort to recover Guadalcanal's strategically important airfield.

The fleet withdrawal has been a sore spot in Navy and Marine relations for years. As this series proceeds, I think you will see that the Navy paid in full any IOUs it owed to the Marines as a result of that forced evacuation. And paid them with blood and raw courage of the highest order.