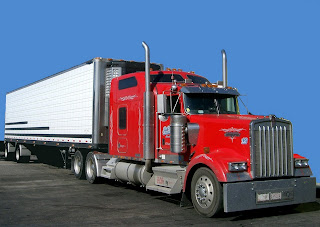 Wondering about the short term future of the economy? Read this by Eric Kulisch and, well, things may not get brighter for you - Freight economics 101 :: www.americanshipper.com:


Most economists have minimized the likelihood that the U.S. or global economies will fall into decline again, but economic data and shipment volumes at freight carriers in recent weeks have raised worries the economy is stalling.
Some of the initial warning signs are coming from a slow-down in business at companies that transport goods. Trucking and other transport modes are leading indicators of economic activity, usually showing upturns or downturns several months ahead of the broader economy.

Some experts suggest weak growth is normal and that the economy and shipments will rebound in the second half of the year. But for the first time since the 2008 financial crisis, the dreaded term “double dip” is being whispered — and it doesn’t refer to the number of scoops at the local ice cream parlor.

Here's a slightly different view 2011 Annual State of Logistics Review: Lack of Recovery Leads to Tightening Trucking Capacity, in which this tight capacity is explained:


Transportation capacity is close to being fully engaged, especially in trucking and air. Though volumes have only recovered around half of what was lost during the recession, total industry capacity is currently much lower than it was in 2007. "The recovery is not being felt evenly throughout the economy and 2010 did little to shore up precarious carriers who have been hanging on hoping to be rescued by a resurgence in the economy," Wilson wrote.

But wait, there's more. Our friend the Baltic Dry Index isn't showing a spurt in shipping rates - a sign that too few goods are chasing too much capacity:

Flash Player 9 or higher is required to view the chart
Click here to download Flash Player now
View the full BDIY chart at Wikinvest
Is that an "uptick" there at the end? It will need to be the "Mother of All Upticks" to counter the 5 year trend: 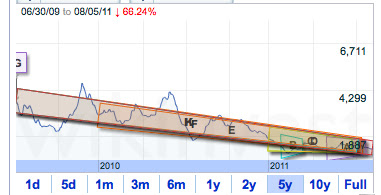 Spot market rates on the Europe-Far East trades have been below breakeven levels for all carriers since March. “Still, freight rates have continued to fall and the numerous attempts to raise rates over the past 12 months all failed,” the analysis firm said in a market report.
***
If implementation is successful, the increases on August 1 would only bring rates back up to where they were in March. “Thus, some carriers would presumably still operate at a loss, even at those somewhat higher rate levels,” Alphaliner said.
The withdrawal of two Asia-Europe service strings in June and July only removes 3.5 percent of the total trade capacity, insufficient to drive vessel utilization rates above 95 percent.

Further, it is ironic that as shipping as slowed, the costs to the operators have increased:


As the largest part of the transportation sector (78%), trucking remains the hardest hit mode as it struggles to cover costs, particularly rising fuel costs. Though much of the increase has come from fuel surcharges, most truckers have not been able to recover all of their actual added fuel costs.

This shows that even as the number of trucking companies has decreased and the volumes carried by the remaining companies may have increased, the profits of more goods chasing fewer trucks are being eaten by increased costs, especially fuel. 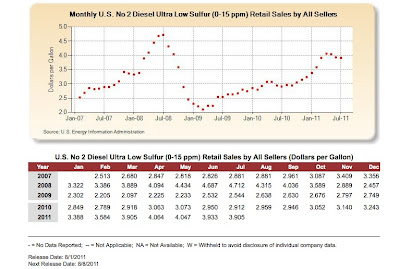