Just the other day I posted Refresher: World Trade Route Chokepoints and now comes along a related piece from George Friedman at STRATFOR, his recognition about Indonesia's position on major sea lanes and chokepoints and the problems that poses for . . . China at Geopolitical Journey: Indonesia's Global Significance (his words in blue - I added the maps): 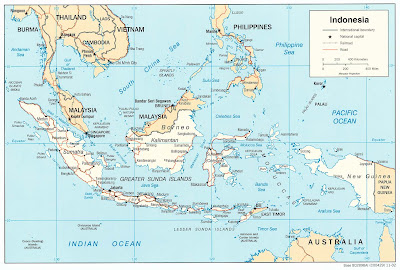 In my recent refresher post on chokepoints, I pointed out that they don't change position - what is a chokepoint today will be one tomorrow, and was one in the past. As a proof of this proposition, take a look at the map below, which shows how the Japanese were planning to protect the vital sea lanes and chokepoints of their empire in 1941:

You might want to take a look at China: Sri Lanka and the Chinese String of Pearls
and the links therein. From that post:


Map is from JOE 2008 published by the U.S. Joint Forces Command and downloadable as a pdf here. I have modified it by adding the Chinese Navy's deployment off Somalia in its anti-piracy role (see here) where China can try out out of area operations in a relatively benign environment while observing/working with other navies (see China's "Maritime Chess'). 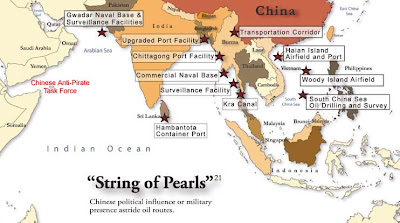 Geopolitical Journey: Indonesia's Global Significance is republished with permission of STRATFOR.
Posted by Mark Tempest at 8/02/2011 08:16:00 AM