Guadalcanal Days 2 and 3: The Battle of Savo Island 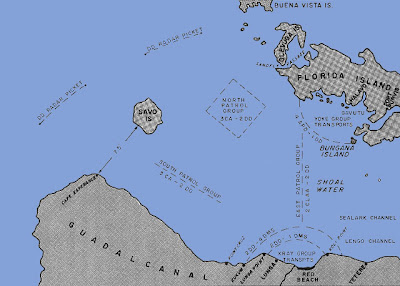 UPDATE: Let's do this like historians - up to this addition, I've given you the result and the lessons learned, but left out an explanation of how things came to pass. Start with the fact that the U.S. Navy and Marines caught the Japanese by surprise and invaded the lightly held (maybe 800 Japanese) but vital island of Guadalcanal on 7 August 1942. See my previous post and the links therein covering how this was accomplished and why here. Now, let's get into RADM Morison's The Two Ocean War as he sets the scene:


Early in the morning of 7 August news of the American landings reached Vice Admiral Mikawa at Rabaul. His decision was prompt and intelligent - to send reinforements to the Tulagi-Guadacanal garrison, and to assemble a task group to attack the American ships unloading there. {Note by E1: The ship carrying the troops is sunk by an American submarine around midnight on 8 August. It's the task force that is the focus of the battle]
*** 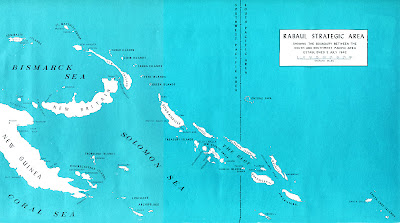 Mikawa's naval reaction is a very different story. One hour after receiving the bad news from Tulagi, he began collecting ... a task group to attack the American Expeditionary Force. It was a "scratch team," the ships had never trained together before, but it proved to be good enough for the task in hand. Heavy cruisers Chokai (flagship), Aoba, Kako, Kinugasa and Furutaka, light cruisers Tenryu and Yubari and one destroyer, Yunagi, made rendezvous in St.George Channel around 1900 August 7 and started hell-bent for Guadalcanal. Mikawa's battle plan . . . was to enter Ironbottom Sound in the small hours of the 9th, strike the warships guarding the expeditionary force, shoot up the unloading transports, and retire. An excellent plan; but the chances of detection were great, as the striking force had to steam in full daylight down the "Slot" between the central Solomon Islands before entering the cover of darkness.

Owing to a series of blunders on our side, [5/7/2013 UPDATE NOTE: AN INACCURATE ALLEGATION BY MORISON HAS BEEN TOTALLY REFUTED BY A NUMBER OF SOURCES PLEASE SEE COMMENTS BELOW - THIS POST HAS BEEN EDITED TO REFLECT WHAT IS NOW KNOWN]  . . . one (or more) sighting(s) of Mikawa's force that day (was/were mishandled) . . .  Admiral Turner did not receive it (them) until over eight hours had passed. (Further what was reported evidently was miscontrued) On that basis (i.e. the misunderstanding of what was seen) Turner made the bad guess that the Japanese were not coming through that night, but intended to set up a seaplane bases at Santa Isabel Island, some 150 miles from Savo, and attack later. [As indicated here below and in other places, Admiral Turner and/or his staff got it wrong in many, many ways.]

Dogmatically deciding what the enemy would do, instead of considering what he could or might do, was not Turner's only mistake on that fatal night. He allowed his fighting ships to be divided into three separate forces to guard three possible sea approaches by the enemy. Rear Admiral Norman Scott with two light cruisers and two destroyers patrolled the transport area between Tulugi and Guadalcanal, and never got into the battle.
***[Note by E1: Morison lays out the other groups, commanded by Royal Navy Rear Victor Crutchley, VC - but coordination among his ships was - uh - lacking]

Turner was so certain that the enemy would not attack that night he made the further mistake of summoning Crutchley, in Australia, to a conference on board his flagship . . . some 20 miles away . . . This action of Turner's stemmed from the worst of all blunders that night: Admiral Fletcher's decision to retire his three-carrier task force from covering position, depriving the landing force of air covernext day. **** He commenced this withdrawal at about 1810 August 8 without consulting Turner, who was below him in the chain of command. That was why Turner felt he had to confer with Crutchley and Vandegrift {Marine commander] to decide whether the partially unloaded transports should depart that night, or risk more Japanese air attack without air protection. Consequently, cruiser Australia and the O.T.C. [Officer in Tactical Command] were not on hand when badly needed, and the depleted cruiser group south of Savo Island was commanded by Captain Bode of Chicago, who acted as if dazed.

And then the confusion began.

From HyperWar: The Battle of Savo Island [ONI Combat Narrative], a discussion of what Samuel Eliot Morison called, ". . . [P]robably the worst defeat ever inflicted on the United States Navy in a fair fight":


The disposition of our cruisers and the remaining destroyers was governed by "Special Instructions to the Screening Group," issued by Rear Admiral V. A. C. Crutchley, R. N., commander of the escort groups and second in command of the Amphibious Forces. To protect the disembarkation area from attack from the eastward, the American San Juan and the Australian Hobart, both light cruisers, were assigned to the area east of longitude 160° 04' E., guarding Lengo and Sealark Channels. They were screened by the destroyers Monssen and Buchanan. At 1850 these ships began their patrol at 15 knots on courses 000° and 180° between Guadalcanal and the Tulagi area.

The area inside Savo Island, between Guadalcanal and Florida, was divided into two patrol districts by a line drawn 125° T. from the center of Savo. It was upon the vessels patrolling these sectors that the Japanese raid was to fall. The area to the north of this line was assigned to the heavy cruisers Vincennes, Astoria, and Quincy, screened by the Helm and Wilson. The last-named replaced the Jarvis, which had been damaged by a torpedo during the day's air attack. This group was patrolling at a speed of 10 knots on a square, the center of which lay approximately midway between Savo and the western end of Florida Island. At midnight it turned onto course 045° T. and was to make a change of 90° to the right approximately every half hour.

The area to the south of the line was covered by the Chicago and H. M. A. S. Canberra, screened by the Patterson and Bagley. H. M. A. S. Australia was the flag and lead ship of this group, but at the time of the action she was absent, having taken Admiral Crutchley to the conference aboard the McCawley. Capt. Howard D. Bode of the Chicago was left in command of the group, although the Canberra ahead of his ship acted as guide. The group was steering various courses in a general northwest-southeast line--the base patrol course was 305°-125° T.--reversing course approximately every hour.

Admiral Crutchley's instructions were that in case of a night attack each cruiser group was to act independently, but was to support the other as required. In addition to the Melbourne warning, a dispatch had been received indicating that enemy submarines were in the area, and night orders placed emphasis on alertness and the necessity for keeping a sharp all-around lookout. The destroyers were to shadow unknown vessels, disseminate information and illuminate targets as needed. It was provided that if they should be ordered to form a striking force, all destroyers of Squadron FOUR except the Blue and Talbot were to concentrate 5 miles northwest of Savo Island. This arrangement was to cause some confusion during the battle.


"The fact must be faced that we had an adequate force placed with the very purpose of repelling surface attack and when that surface attack was made, it destroyed our force," said Admiral Crutchley. After full allowance for the element of surprise and for the fact that the attacker at night enjoys an immense advantage, there remain many questions about the action which cannot be answered.
***
The redeeming feature of the battle was the splendid performance of our officers and men. They had been on the alert for days and had had about 48 hours of continuous, active operations immediately before the battle. In spite of this, their conduct under the most trying circumstances was beyond praise, and they made it, in the happy phrase of one of our officers, "a night in which heroism was commonplace."


Instead of repeating the ONI Combat Narrative here, please go read the Hyperwar link. It is well worth your time.

You can also find a report in the USNI Solomons Campaign series at Execution at Savo Island by CDR Bill Ballard:


There is no shortage of lessons learned from Savo Island.  To pull out just a few of the big ones: 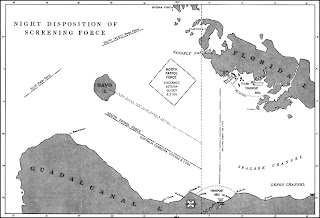 Communication between supporting/-ed commanders: With the entire operation in its infancy, URR’s lesson of streamlined dissemination and obtaining of INTEL and aerial reconnaissance information is still applicable.  Allied shore-based reconnaissance aircraft were either under the command of COMSOPAC or COMSOWESPAC, with little effective communication or coordination.  COMSOWESPAC aircraft detected (and mis-identified) Mikawa’s force the morning of the 8th; by the time it reached CTF 62 it was too late to send any more aircraft to either further identify or attack them. 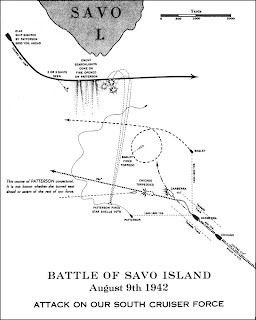 Capability vs. Intent: Be ready for what your enemy CAN do to you, not what you think your enemy WILL do to you.  Taking two seaplane tenders out of the mis-identified formation, there were still five ships that were capable of reaching Savo that night.  Taking this into account, had some or all of TG 62.6 been in Condition I through the night, with a real plan or set of PPR’s in place… 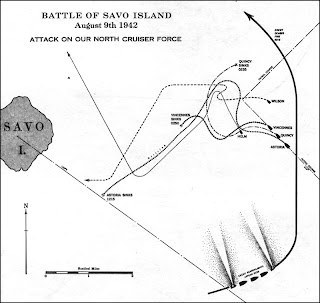 Trusting your Technology: Only if you understand its limitations.  On a tactical level this battle was less a case of visually targeted torpedoes defeating RADAR-directed gunnery and more a case of over-reliance on incorrectly employed RADAR leading to the complete surprise of TG 62.6.  Even though in training BLUE and RALPH TALBOT exhibited RADAR detection ranges greater than Japanese visual detection ranges, the long wave SC RADAR’s performance suffered terribly near land.  Additionally, their assigned search tracks at times left 20 mile gaps between the two ships. (Bates, pg. 350)  Interestingly, the most capable Allied RADAR, the SG RADAR, was aboard SAN JUAN and never saw action.  One wonders what the outcome could have been if, between Crutchley, Scott and their staffs, they had decided to put SAN JUAN in one of the picket stations.

Technology vs. Tactics, Training and Procedures (TTP): The action at Savo commenced with both sides well within the effective range of their preferred weapons.  This is the range at which training pays off.  Simply put: the IJN had trained; the USN hadn’t.  Of the Allied ships, only ASTORIA had conducted any recent night target practice, and it had been at least eight months (more than likely indefinite in the case of QUINCY and VINCENNES, recently arrived from the Atlantic) since any other cruiser had conducted either night target exercises or a night battle problem. (Bates, pg. 356)


US Navy losses: From here:

UPDATE: Added some additional paragraphs from the ONI report to set some background.
Posted by Mark Tempest at 8/09/2011 12:03:00 AM

Email ThisBlogThis!Share to TwitterShare to FacebookShare to Pinterest
Labels: Guadalcanal, RAN, US Navy, War at Sea