Millions of starving Somalis (that could be a headline at almost any point in the past what, 22 years?) - and a big piece of the world "rescue" effort is being stolen and sold in markets by - surprise, surprise - criminal gangs (clans) as reported in Somalia food aid stolen, sold in markets - CBC News:


An official in Mogadishu with extensive knowledge of the food trade said he believes a massive amount of aid is being stolen — perhaps up to half of aid deliveries — by unscrupulous businessmen.

The percentage had been lower, he said, but in recent weeks the flood of aid into the capital with little or no controls has created a bonanza for businessmen.

The official, like the businessmen interviewed for this story, spoke on condition of anonymity to avoid reprisals.

The AP could not verify the official's claims. WFP has not said how much food aid it believes is being diverted.

At one of the sites for stolen food aid, about a dozen corrugated iron sheds are stacked with sacks. Outside, women sell food from open 110-pound sacks, and traders load the food onto carts or vehicles under the indifferent eyes of local officials.

Stolen food aid is not new in Somalia — it's the main reason the U.S. military become involved in Somalia during the country's 1992 famine, an intervention that ended shortly after the military battle known as Black Hawk Down. There are no indications the military plans to get involved in this year's famine relief efforts.

Oh, and one of the problems, aside from the thuggery of the Somali society, is "insecure supply lines":


WFP said in a statement that it has put into place "strengthened and rigorous" monitoring and control in Somalia.

"However, given the lack of access to much of the territory due to security dangers and restrictions, humanitarian supply lines remain highly vulnerable to looting, attack and diversion by armed groups," WFP told the AP.
***
The AP investigation also found evidence that WFP is relying on a contractor blamed for diverting large amounts of food aid in a 2010 UN report.

Of course, the ever popular Human Rights Watch correctly (and pointlessly) notes that "everyone" is to blame (except, presumably, the victims) as repeated by the media here:


All parties to Somalia’s armed conflict have committed serious violations of the laws of war that are contributing to the country’s humanitarian catastrophe, Human Rights Watch said in a report released today. All sides should immediately end abuses against civilians, hold those responsible to account, and ensure access to aid and free movement of people fleeing conflict and drought.

Well, let's send in the Human Rights Watch peacekeepers and gather everyone for a round of singing "Kumbaya."

UPDATE: A WFP map showing the extent of the problem. You might note that the northern part of Somalia, where most of the pirate activity is based, in not in the (presumably worse) dark orange "food aid" zone: 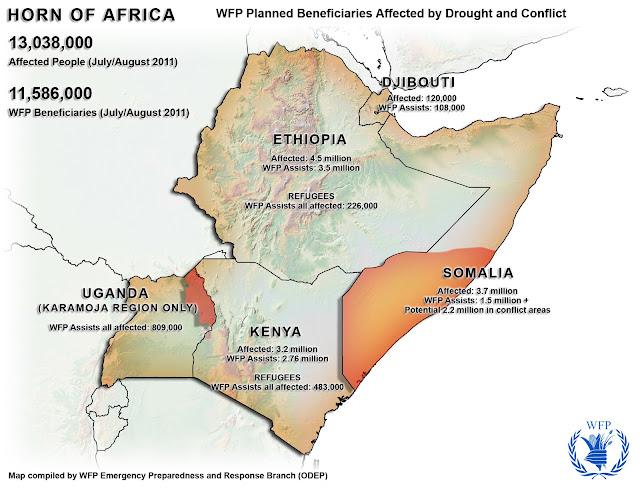