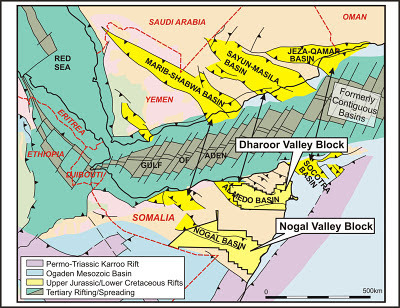 
Horn Petroleum Corp. has spudded the Shabeel-1 wildcat on the Dharoor block in Puntland, northern Somalia, toward a planned total depth of 3,800 m, said Africa Oil Corp., Vancouver, BC, which owns a 51% equity interest in Horn Petroleum.

Operations have also started on the Shabeel North-1 well with the setting of the 30-in. surface casing and the drilling of a 50-m pilot hole. The Sakson 501 rig will be used to drill both wells, and drilling and evaluation time is put at 90 days each.


The Shabeel and Shabeel North prospects are located on a Jurassic aged rift system which is part of the same system that has proven to be highly productive in the Masila and Shabwa Basins in Yemen that contain an estimated 6 billion barrels of oil*. Both prospects are very large fault block prospects with internal most likely estimates of potential oil volumes of over 300 million barrels of recoverable oil. Source rocks are expected to be rich Jurassic Kimmeridgian shales in the deep portion of the rift immediately down dip from the Shabeel prospects. Reservoirs are expected to be sandstones and carbonates of the Lower Cretaceous and Jurassic systems analogous to Yemen.

Horn President and CEO David Grellman commented "The commencement of drilling in the Dharoor Valley block is a major milestone in the evaluation of the oil potential of Northern Somalia. We have had very strong support from the Puntland regional government and the local communities who are all keen to see development resume in the region after prolonged periods of internal strife. These wells are the first to be drilled into the deep areas of the rift basins and will be key to unlocking the hydrocarbon potential of this unexplored prospective trend".

Oh, look, an industry other than piracy.

Watch for stories about the corruption of the Puntland oil money flows, along the line of those set out in this Wikipedia article. And for stories of the exploitation of Africa's natural resources by the West.