World Oil Transit Chokepoints - Add One More to the List

The U.S. Energy Information Agency has a dandy list of those narrow places on the earth where oil flowing in commerce on ships can be threatened by "pirates, terrorist attacks, and political unrest" at World Oil Transit Chokepoints. The list includes the Strait of Hormuz, the Strait of Malacca, the Suez Canal, Bab el-Mandab, the Bosporus, Panama Canal, and the Danish Straits.

Time to add another narrow area to the list, the "O Gap" sometimes located in Washington,DC and, unique to chokepoints, known to be more a part of a calculation than a real spot on the planet.

Shown below is a rare capturing of the "O Gap" as it begins to close off a route of oil to the U.S.: 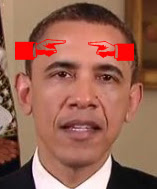 Some might feel that the "O Gap" would be better known as the "Keystone Twist". Many people are unhappy with its existence, as set out in Expected Keystone XL permit rejection strongly criticized:


US Sen. Richard G. Lugar (R-Ind.), the primary sponsor of legislation that set a deadline for a decision, said the administration misled the American people on the pipeline. “In the face of Iranian threats against oil affordability, [it] once again is trying to blame Congress and the State of Nebraska instead of taking responsibility for American jobs and security,” he said during an appearance at a Greenwood, Ind., instruments and gauges manufacturer who potentially would be doing work for the project. “This political decision offers hard evidence that creating jobs is not a high priority for this administration,” said US Chamber of Commerce Pres. Thomas J. Donohue. “By placing politics over policy, the Obama administration is sacrificing tens of thousands of good-paying American jobs in the short term, and many more than that in the long term.”*** “Blocking the Keystone pipeline would be an enormous mistake by the Obama administration,” said National Center for Policy Analysis Senior Fellow H. Sterling Burnett. “We need the oil and we need the jobs it would bring. This is as ‘shovel ready’ as anything Obama has proposed, yet because his radical environmental constituency objects, he’s apparently halting the pipeline.”

Or, as set out in the video linked at Instapundit, “He chose Venezuela over Canada.”, which really ought to be watched.

China must like the result, Canada will look to China to sell its oil. I guess the oil tanker owners will be happy, too.