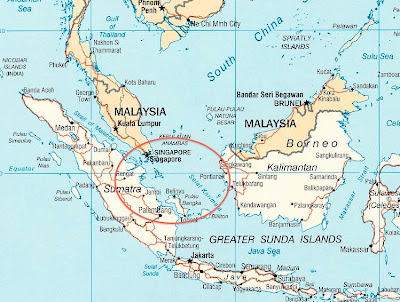 
Indonesian authorities have rescued a tug boat with nine crew believed to have been hijacked in the Straits of Singapore, a sea lane seeing a rise in attacks, an official said on Monday.

The boat was recovered on Saturday off Indonesia, said Noel Choong, head of the piracy reporting center of the International Maritime Bureau (IMB).

It had been towing a barge laden with heavy machinery and piling materials which an Indonesian aircraft and three warships found in the same area a day later, he added.

The tug and barge, heading from peninsular Malaysia to Borneo island, last made contact on December 27 off southern Malaysia near the Straits of Singapore before it was hijacked, Choong said.

Email ThisBlogThis!Share to TwitterShare to FacebookShare to Pinterest
Labels: Indonesia, Strait of Malacca, Strait of Singapore