For a couple of days my "news feeds" have been full of this Bloomberg piece, "Shooting to Kill Pirates Risks Blackwater Moment on High Seas", which was spawned, in turn, by a video that I have refused to post because it seems to show armed guards on a ship blazing away at suspected pirate boats (and the suspected pirates in them) somewhere at sea.

My refusal to post the video is because the video takes everything out of context, being but a piece, I assume, of all the activity that led up to the action portrayed.

Assume that the ship had hired the guards to protect the ship, that in the course of that protection some suspicious boats began acting suspiciously like pirates and began to head in toward the protected vessel and that the suspected pirates in said boats were either waving weapons about or actually firing weapons in an attempt to force a boarding of the ship by the suspected pirates. Assume that the senior manager of the vessel, the Captain, was keenly aware of all these goings on and at some point, authorized the use of weapons to deter the apparent attack. Now, take a look at what the video does show - that, despite the gun fire coming from the vessel, the suspected pirate craft continued their approach to the ship, traveling at high speed, even to the point where a suspected pirate boat came alongside the ship in an apparent effort to allow boarding of the ship by some persons riding in the small boat. Further note that the apparent assault on the ship seemed to involve more than one small boat, and that as one boat was being engaged on one side of the ship, another boat was apparently making a run in on the ship on the other side.

So, if you are with me so far, it is not unreasonable to assume that the armed security guards were engaged in providing "self defense" for the ship as directed by the Captain in a situation where only the people on the scene had full knowledge of what they perceived to be a threat to their lives and their safety in an area known for its piracy. 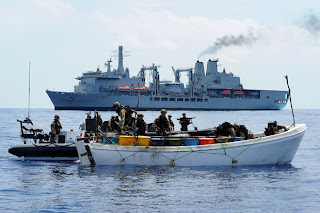 Well, if you thought that way, you are not thinking of the safety of those poor gentlemen in the small boats - you were not properly concerned that, although the small boat operators could have simply turned around and driven their boats and themselves out of rifle range, the onus was somehow on the ship and its security team to "play nice." As set out in the Bloomberg piece:


Reckless gun use at sea could put the whole industry at risk of reputational damage, said Stephen Askins, a partner at the London-based law firm Ince and Co., who has negotiated with Somali pirates for the release of hostages. "You can't have a Blackwater out in the Indian Ocean," he said, referring to the 2007 incident in which Blackwater Worldwide security guards allegedly fired on and killed civilians in Baghdad. ***

What? No, with all due respect to Mr. Askins, it is not "reckless gun use at sea" unless you ignore all the other circumstances, as set out by the president of the private security company involved:


He said the incident on March 25 last year was the second attempt to hijack the Avocet in three days. After spotting rocket-propelled grenades on the first skiff, the guards feared for their lives. The shootings were justified and the guards acted responsibly, Rothrauff said, firing warnings before aiming at the boat.

So, not "wild, wild west" - and it is almost criminally silly to use this video fragment to raise doubt of the need for actions undertaken by men at sea in a tight spot.

As for the safety and well-being of the suspected pirates - well, as I said earlier, the men operating the boat had full control of the situation. They chose to drive in toward the ship, so spare us the bleeding heart comparisons to an incident in Iraq under much different circumstances.

UPDATE: One problem with the rule of law with these pirates is that seems to be mostly a one-way street, tying the hands of counter-piracy forces while letting pirates go free, as set out in The Guardian's Outgunned Somali pirates can hardly believe their luck:Few countries are willing to prosecute and most captives suspected of sea piracy are eventually released:


Commanders estimate that for every pirate captured and sent for trial, another three or four are released. This year dozens of pirates have been put quietly back to shore, despite good evidence to support prosecution.
***
So, without fanfare, more and more of the suspected pirates are being freed, the incentive to hunt them is slightly diminished, and the Somali criminals can hardly believe their luck. "When I have told them [the pirates] that we are putting them back to shore they are more or less celebrating," said Commander Anders Friis, captain of the Absalon. "They are very, very happy."

Of course they are.

UPDATE2: Another note of concern sounded at the Christian Science Monitor's Does a military solution for Somali piracy work?:

Since 2008, Somali pirate gangs have launched more than 800 attacks on commercial ships, with 170 ships hijacked, and 3,400 sailors held for ransom. Shipping firms have paid more than $530 million on private security firms during that time period, and $160 million was paid out to pirate gangs last year alone.

That, clearly, is the reason Somali gangs get into the pirate business. Do a few well-armed security guards onboard commercial ships, or a few naval patrol ships deter those pirates from taking to the high seas? Some point to the dropping number of pirate attacks – from 45 attacks in 2010 to 24 in 2011 – as a sign that naval patrolling and private security may be working.

It's unclear just why pirate attacks have dropped. Private security firms credit their use of guns and razor wire, while the European Naval Force takes credit with their increased patrols. The truth may be more complex, and even proponents of military force admit that the battle is far from won.

Indeed, there is no evidence that pirates are either staying home, or that they are being more selective about which country’s ships to attack and which to avoid, based on that country’s past tactics against pirates.

The article concludes, as has been long asserted here, that any "solution" to the Somali pirate problem begins on the beaches of Somalia.