For those of you following al Qaeda's system of asymmetric warfare, you've got to wonder if this is a AQ "proof of concept" of a possible UAV attack when you see a headline like this one from the NY Post, "Mystery ‘drone’ plane spotted near JFK":


The pilot told investigators the object was flying at about 1,800 feet and looked like “a black drone about a meter square, with helicopter rotors on the corners.”


You might as well ask how such an attack might work. Well, a goose can bring down an airplane:


Bird strikes, or the collision of an aircraft with an airborne bird, tend to happen when aircraft are close to the ground, which means just before landing or after take-off, when jet engines are turning at top speeds.

The incidents are serious particularly when the birds, usually gulls, raptors and geese, are sucked into a jet engine and strike an engine fan blade. That impact displaces the blade such that it strikes another blade and a cascade can occur, resulting in engine failure.

You can take the concept from there.

You'll be pleased to note that "The Joint Terror Task Force is now probing the sighting of the mysterious flying object . . ."

Of course, it might just be some amateur out playing with his new toy.

Could you build a four rotor flying thingie? Heck, you can buy a small one here for about $100: 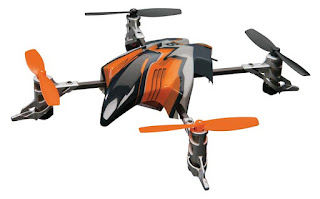