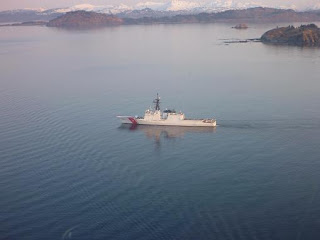 
There is a fair bit of talk about the rush for the arctic for economic and strategic reasons - and where there is international interest on the seas, the nations involved need to think about what is the best way to secure their interests.

While the initial thought might be Navy - is the natural answer really the Coast Guard? If the USCG is the right answer, is it trained, manned and equipped for the job?
What does it need to do in order to fulfill its role - and why may it be the best answer to the question - who will show the flag up north?

Our guest this Sunday for the full hour from 5-6pm EST will be U.S. Naval War College Associate Professor James R. Holmes. As a starting point for our conversation, we will use his latest article in Foreign Policy: America Needs a Coast Guard That Can Fight: As the Arctic becomes an arena for conflict, the United States’ forgotten naval force will need to cowboy up.

Join us live or later by going to Midrats on BTR or picking up the show later from our iTunes page (lately there has been some delay in getting the show to iTunes, though, and the link may require iTunes).
Posted by Mark Tempest at 3/22/2013 01:04:00 PM