Mining Methane Hydrate and What It Means


As greenhouse gas, methane is more powerful than carbon dioxide, but there is a much more important difference between these two gases. Carbon dioxide emissions are something that we create and that we can control, at least in principle. If we stop burning fossil fuels, then we stop generating CO2. But, with methane, it is another matter. We have no direct control on the huge amounts of methane buried in ice in the permafrost and at the bottom of oceans in the form of "hydrates" or "clathrates."

Methane hydrates are a true climate bomb that could go off by itself as the result of a relatively small trigger in the form of a global warming. Sufficient warming would cause the decomposition of some hydrates to release methane to the atmosphere. This methane would create more warming and that would generate more decomposition of the hydrates. The process would go on by itself at increasing rates until the reservoirs run out of methane. That means pumping in the atmosphere truly a lot of methane. There are different estimates of the amount stored in hydrates, but it is surely large - most likely larger than the total amount of carbon present today in the atmosphere as CO2. The effects of the rapid release of so much methane would be devastating: an abrupt climate change that could bring a true planetary catastrophe. It is a scenario aptly called the "clathrate gun" and the target is us.


Second, a quick look at issues in trying to exploit methane hydrate as a fuel source in The Risky Business of Mining Methane Hydrate:


The potential rewards of releasing methane from gas hydrate fields must be balanced with the risks. **** Let's start first with challenges facing mining companies and their workers. Most methane hydrate deposits are located in seafloor sediments. That means drilling rigs must be able to reach down through more than 1,600 feet (500 meters) of water and then, because hydrates are generally located far underground, another several thousand feet before they can begin extraction. Hydrates also tend to form along the lower margins of continental slopes, where the seabed falls away from the relatively shallow shelf toward the abyss. The roughly sloping seafloor makes it difficult to run pipeline.

Even if you can situate a rig safely, methane hydrate is unstable once it's removed from the high pressures and low temperatures of the deep sea. Methane begins to escape even as it's being transported to the surface. Unless there's a way to prevent this leakage of natural gas, extraction won't be efficient. It will be a bit like hauling up well water using a pail riddled with holes.

Believe it or not, this leakage may be the least of the worries. Many geologists suspect that gas hydrates play an important role in stabilizing the seafloor. Drilling in these oceanic deposits could destabilize the seabed, causing vast swaths of sediment to slide for miles down the continental slope.


On the other hand, developing methane hydrate mining might ease some of those worries of a catastrophic release if done safely and it does offer a fuel source. As set out in Mining "Ice That Burns":


Trapped in molecular cages resembling ice, at the bottom of the ocean and in terrestrial permafrost all over the world, is a supply of natural gas that, by conservative estimates, is equivalent to twice the amount of energy contained in all other fossil fuels remaining in the earth’s crust. The question has been whether or not this enormous reserve of energy, known as methane hydrates, existed in nature in a form that was worth pursuing, and whether or not the technology existed to harvest it.
***
While no one believes that all of the world’s methane hydrates will be recoverable, the scale of global reserves has been described by the U.S. Department of Energy as “staggering.” They occur anywhere that water, methane, low temperatures, and high pressure co-occur–in other words, in the 23 percent of the world’s land area covered by permafrost and at the bottom of the ocean, particularly the continental shelf.
***
The United States is not the only country with plans to attempt long-term production tests of methane hydrates. Japan is spending by far the most money on methane hydrate research; it provided most of the funding for the Mallik tests, which were sponsored by the Japan Oil, Gas and Metals National Corporation and by Natural Resources Canada, with field operations by Aurora College/Aurora Research Institute and support from Inuvialuit Oilfield Services.

According to the Center for Hydrate Research’s Koh, Japan is investing heavily in attempts to harvest deep-sea hydrate reserves discovered off the southern coast of Japan in the Nankai Trough.

“The Japanese are planning commercial production from the Nankai Trough by 2017,” says Koh. If they succeed, Japan will tap the first domestic fossil-fuel reserves the country has ever known.

A Popular Mechanics "demystification" of "Fire Ice" here, which looks at the "scary story" above:


But what if the earth released the gas as a result of heating up? Not only energy companies but also scientists studying climate change have a major interest in methane hydrates. Methane is a greenhouse gas, a far more powerful one than carbon dioxide, and some scientists fear the warming of the earth could destabilize hydrates to the point that they release methane into the atmosphere, further worsening global warming. Ideas such as the clathrate gun hypothesis suggest that methane hydrate dissociation is linked to prehistoric global warming.

However, according to a Nature Education paper published by the USGS, only about 5 percent of the world's methane hydrate deposits would spontaneously release the gas, even if global temperatures continue rising over the next millennium. In addition, bacteria in the nearby soil can consume and oxidize the methane so that only a minute fraction (as low as 10 percent of the dissociated methane) ever reaches the atmosphere. 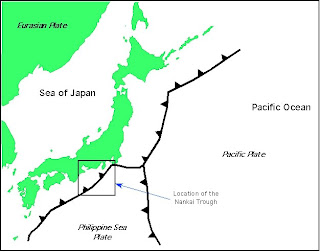 So, now, you have the background to understand this report, Methane hydrate flow established off Japan:


Japan Oil, Gas and Metals National Corp. (Jogmec), Tokyo, said it has produced methane from methane hydrates during tests of a well drilled in about 1,000 m of water offshore the Atsumi and Shima peninsulas of Japan.

The well, operated by Japan Petroleum Exploration Co., produced methane by depressurization of hydrates in a layer 270-330 m below the seabed.

Jogmec said it was the first offshore test of methane hydrate flow ever conducted.

Jogmec's summary of its activities here.

Baby steps to diminishing the importance of Mid-East energy and easing some issues over sea lanes.
Posted by Mark Tempest at 3/21/2013 10:48:00 AM