One of the world leaders in aquaculture, China's system is reviewed in this piece, "An Overview of China's Aquaculture (pdf), prepared by a Dutch agency:


Currently China’s output from aquaculture is the largest in the world and accounts for about 67% of the world’s total production. Moreover, China is the only country in which aquaculture output exceeds wild capture output and where more than 90% of the domestic consumption of seafood is from aquaculture.
****
In the period of the 11th 5 year plan, legislation on fishery rights got an important breakthrough. For the first time, it was clearly defined that the farmers’ right of culturing and fishing in waters and tidal area are protected by the law. Some relevant standards for fisheries such as standard of pollution free aquatic product, standard of waste water discharge in freshwater aquaculture have also been set up. Meanwhile, the supervision and testing system of residues of antibiotics and chemicals in aquatic products is improving.
***
Nowadays, the main marine aquaculture species in China are shrimp, scallop, large yellow croaker, turbot, oyster, mussel, abalone, sea cucumber, sea urchin and clam. The major culture species have changed a lot in recent years. For example, farrer’ scallop and Penaeus Chinensis were two major culture species in China twenty years ago. However, with the occurrence of serious diseases and variety degeneration which caused high death rate, the two species vanished gradually.
**** 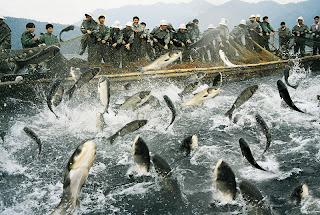 The main types of marine aquaculture include as follows: 1. land based culture. This type has been used as the major culture method of shrimp. Some marine crab like swimming crab and Samoan crab also are cultured in the ponds. 2. Offshore culture: Floating raft culture and cage culture are two main types. Floating raft culture normally is used to culture shellfish like scallop, oyster etc. Cage culture is relatively a new technology in China and is used to culture some high value fishes like sea bream, sea bass and big yellow croaker etc. Tidal flat culture: this culture method is used to culture the animals with weak moving ability like scallop, mussel, abalone, sea cucumber and clam etc.
****
Unlike marine culture, freshwater culture is scattered all over the country. The main species are common carp, bighead carp, silver carp, grass carp, Tilapia, Chinese mitten crab, eel, river crab and shrimp. Most farms of fresh water culture are small scale and distributed in a wide geographical range, which makes freshwater products mainly focusing on local market. Also, in recent years, with the decrease of caught fish outputs and the increase of the price, the outputs of some freshwater fishes such as catfish and tilapia are growing rapidly to meet international market
**** 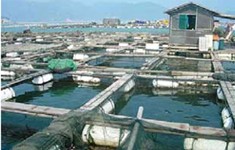 China’s aquaculture expansion has mainly relied on increasing the production capacity and farming area (Jorge et al, 2009). Together with the more demand of products, the more space is needed for aquaculture, that caused some conflicts of the fast expansion of the industry. China is a country that short of freshwater resource per capita. In many areas, domestic water is shortage. At the same time, aquaculture in lakes, rivers and reservoirs made the water eutropic and have influenced the supply of domestic water. If wastewater of aquaculture contains too much nutrients, the structure of natural species may be influenced and local ecosystem will be destroyed. The problem has caused more attention of the government. More strict regulations had
been made by the government related with the quality standards of the wastewater. On the other hand, with the fast grow of the Chinese economy; other industries have also developed very fast. Many heavy pollution industries e.g. papermaking, chemical industry would like to build the plants and need a big amount of water. The existence and expansion of these plants have limited the development of aquaculture.

For the seawater culture, the intensive culture has caused the water eutropic in some area. In recently year, the red tide erupted more frequently alongshore. It becomes a vicious circle. The wastewater from aquaculture and other industries made the pollution of the water and cause the red tide. On the other hand, the frequent occurrences of red tide have caused a great economic loss on breeding seafood, fishing, human health, and damaged coastal tourism. How to balance the development of aquaculture and to protect environment is a challenge that need to be solved

And an interesting report on the effect of one of China's decisions on aquaculture spreading around the world - this time in the insurance industry here.
Posted by Mark Tempest at 3/13/2013 11:45:00 AM