So, if North Korea declares the armistice dead, when can we start the bombing?

As you may know, the Korean War was never "over" - instead, what has been going on since my dad was flying B-26s over the "Land of the Morning Calm" has been an "armistice."

So now,with this headline, "Pyongyang scraps armistice amid heightened saber rattling", CNN gets it exactly wrong - the NORKS have a perfect right to call off their side of the agreement, and I assume, that means it's time for someone on the other side (our side) to say, "Now let the war begin again."

I personally think that it is time to make the NK "Axis of Evil" leadership feel some pain for this silly announcement.

If I were the Prez, I would give NK about 24 hours to rethink their position and, in the event that they decide to stick with their position, I would unleash the dogs of war or at least the cruise missiles of war directed at railroads, bridges and power plants . . .

Of course, that's not how things are done . . . in the civilized. world.

Which is not the world Kim Jong Un lives in, so he and his gang are trying to "bully" their way into a "better" truce and win concessions. It is not beyond imagining that there will be blood spilled until someone in the alliance against the NORK thuggery decides enough is enough.

UPDATE: The text of the Armistice in question can be found here, of which the key part seems to be is:


62. The Articles and Paragraphs of this Armistice Agreement shall remain in effect until expressly superseded either by mutually acceptable amendments and additions or by provision in an appropriate agreement for a peaceful settlement at a political level between both sides.

Or by restarting the war, I assume, because what else is a unilateral renunciation?

Update2: An old look at wrecking someone's infrastructure by torpedoes delivered by air: 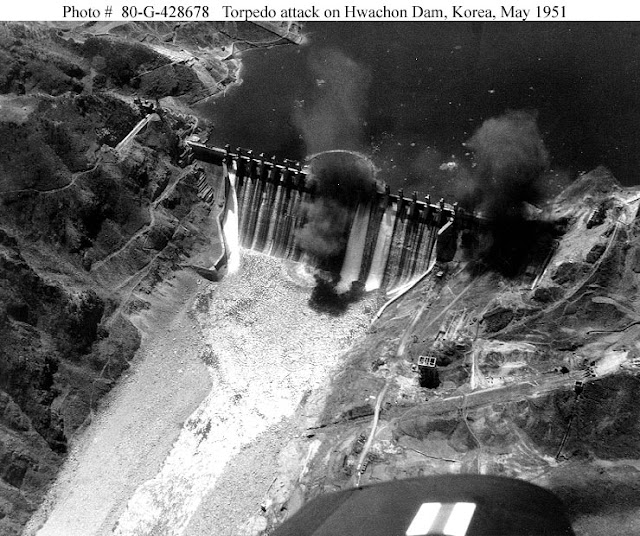 You can read about the Hwachon Dam attack here (pdf):