Tired of the Sea? Here's a retirement option . . . 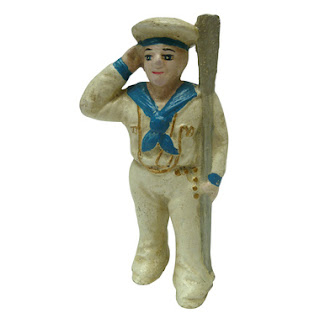 There is a very old tale told of a sailor so tired of the sea that he took to foot with an oar over his shoulder:


The story, as I remember it, goes roughly like this, that there was an old sailor in the United States Navy--presumably, since the story took place on the East Coast of the US. He put in his thirty years, and took his retirement option, and set out walking down the gangplank with a gunnysack over one shoulder and carrying an oar over the other shoulder, and headed due west inland, and walked somewhere through New Jersey or so, and happened to pass someone standing along the road who waved to him and said,, "Where're you going with that oar over your shoulder?" And he just nodded, and barely looked at the person who greeted him in this fashion, and marched on heading westward, and traveled further and further inland.

At some point in the middle, of, say, Ohio or Indiana he passed someone else alongside the road who waved at him, greeted him, and yelled as he passed by, "Hey, where're you going with that rower over your shoulder?" And he just sort of barely met eyes with the person who greeted him in this fashion, and kept on walking.

And sometime further along the way, perhaps around Nebraska somewhere, he passed someone along the side of the road who said to him something to the effect of, "Hey, mister, what on earth are you carrying that piece of lumber over your shoulder for?" And a grin slowly broke across his face, and he stamped his foot and said, "This is where I'm settling down." And that's the end of the story.

Well, having lived in Nebraska when I was much younger, I believe that sailor could have dropped his oar in western Nebraska or eastern Wyoming and had no further worries about the sea.

Which brings me to this tale of art and opportunity, Own a Nebraska icon: Carhenge is for sale


Carhenge, one of Nebraska's most popular, strangest tourist attractions, is for sale. 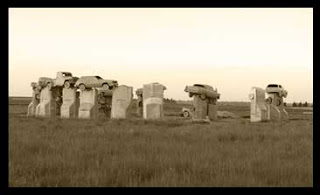 The Friends of Carhenge, a nonprofit group that has owned the Stonehenge-esque attraction since 1994, has listed the monument and its 10 acres just outside of Alliance with James Land Co. in Saratoga, Wyo. Asking price: $300,000.

Carhenge is a replica of Stonehenge, a prehistoric monument on Salisbury Plain in Wiltshire, England. More than 800,000 people visit the circle of stones in Great Britain each year, with many thousands dropping in during the summer solstice.

About 80,000 people a year go to the not-so ancient Carhenge about two miles north of Alliance along U.S. 385 in the Panhandle.