About 8 or 9 years ago there were dire warnings about the possible danger of some sort of attack that could result in "electromagnetic pulse" ("EMP") damage to the U.S. (see Yet Another Threat). Sen Jon Kyl, Speaker Gingrich and others raised alarms.

Now, these issues rise again, this time with the North Koreans as the threat. For example, from The Washington Times :


North Korea has labored for years and starved its people so it could develop an intercontinental missile capable of reaching the United States. Why? Because they have a special kind of nuclear weapon that could destroy the United States with a single blow.

In summer 2004, a delegation of Russian generals warned the Congressional Electromagnetic Pulse (EMP) Commission that secrets had leaked to North Korea for a decisive new nuclear weapon — a Super-EMP warhead.

Any nuclear weapon detonated above an altitude of 30 kilometers will generate an electromagnetic pulse that will destroy electronics and could collapse the electric power grid and other critical infrastructures — communications, transportation, banking and finance, food and water — that sustain modern civilization and the lives of 300 million Americans. All could be destroyed by a single nuclear weapon making an EMP attack.


More at Chaos from the Sky: Why the EMP Threat Is Real:


An EMP attack would cause cascading failures in other critical infrastructures and a possible national blackout. These conclusions are based on tests showing that E1 high-EMP simulators couple well to electric grid distribution power lines and low-voltage cables. Radasky and Pry point out that “electronic control systems are effectively the Achilles’ heel of our power delivery network.”

The electrical power grid supports all of America’s other critical infrastructures and is vulnerable to an EMP. Any credible threat depends on critical communications infrastructures. If an EMP attack should succeed, more than two-thirds of the American people could perish within 12 months of the event.

And more at Rebuttal to “The EMP threat: fact, fiction, and response” (co-authored by Dr. Pry who also wrote the Washington Times opinion):


One scenario of particular concern to the EMP Commission is that rogue states or terrorists could make an “anonymous EMP attack” by launching a short- or medium-range missile off a freighter outside US territorial waters.22 This would eliminate the need for an ICBM to deliver the EMP attack. Since the EMP strike would come from no one’s territory, it could also conceal the identity of the attacker. Although it would not be necessary, an additional layer of anonymity could be achieved by a state sponsor by contracting with terrorists to carry out the attack.

It should be noted that Dr. Pry is also head of EMPACT America, " . . . a bipartisan . . . organization for citizens concerned about protecting the American people from a nuclear or natural electromagnetic pulse (EMP) catastrophe."

The Institute for Foreign Policy Studies has produced a white paper on Counter the EMP Threat: The Role of Missile Defense (pdf)(2010) that suggests improvements to the Aegis BMD force and other practices to reduce the risk.

Does the DPRK have a missile capable of reaching the U.S.? Take a look at the chart above - the answer currently seems to be "no" - but North Korea rocket 'has 10,000km range' the BBC reported in December 2012. It appears the NORKs have a new system, the Unha-3 that has longer legs than what they've been up to previously but there are questions about its payload capacity:


Despite western press speculation that the Unha 3 could be the basis for an intercontinental ballistic missile that could reach the United States, this three stage rocket is incapable of lofting the payload necessary for that mission. Similarly the American and Soviet analogues (Thor and R-14) could not be upgraded for such a mission. In 1957 Soviet Chief Designer Yangel sold his R-16 ICBM concept to the leadership as simply his R-12 IRBM serving as the second stage to his R-14 MRBM. In fact substantial redesign and repackaging of all elements, and new propellants were necessary to provide a viable ICBM. The same applies to any North Korean design, which would require a new 3-m diameter first stage.

However, some cautionary advice in the update to Business Insider's North Korea Is Not Even Close To Hitting The US With A Nuke, which also linked to this video from USC professor Gruntman:

Just to add to the tale, comes this DPRK propaganda photo (via The Washington Post) , purportedly showing the lines of attack on the U.S. mainland, including, oh, my!, the Eastern Seaboard on the high tech chart in the background: 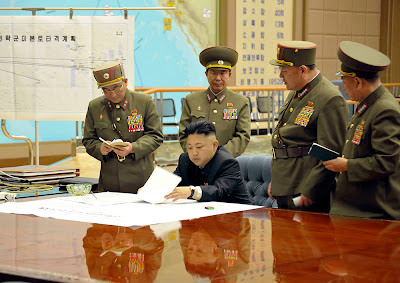 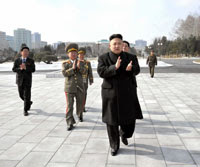 He said the enemies are bringing dark clouds of a nuclear war testing the DPRK's self-restraint, adding the DPRK can no longer tolerate this. He ordered the KPA to blow up and reduce everything to ashes at a single strike, if an order is issued.

He said the heroic service personnel of the KPA and all other people, their hearts burning with irrepressible resentment at the reckless war provocation moves of the U.S. imperialists, are now waiting for a final order of the WPK Central Committee, hardening their will to turn out in a do-or-die battle with the enemies.


Finally, I added this as an update to a previous post, but it worth considering in light of the above, George H. Wittman's Peace Through Bluster and Missiles.