1944 - Invasion of Normandy, Rome Liberated; 1942 Cleaning Up After the Midway Battle 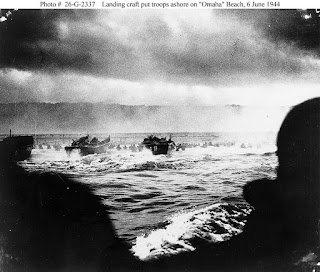 Nice 1944 Normandy invasion overview at the Naval History and Heritage Command's Invasion of Normandy. Was it only a couple of years before that the U.S. was pushed into the war?


The people of Rome have crowded onto the streets to welcome the victorious Allied troops.

The first American soldiers, members of the 5th Army, reached the centre of Rome late last night after encountering dogged resistance from German forces on the outskirts of the city.

Early this morning it was announced the German troops had been ordered to withdraw.

Rome is the first of the three Axis powers' capitals to be taken and its recapture will be seen as a significant victory for the Allies and the American commanding officer who led the final offensive, Lieutenant General Mark Clark.

When we speak of the "allies return to Europe" we need to remind people that the Italian campaign was a hard fought struggle up the spine of Italy - a part of Europe - which began in September 1943.


The morning of the 6th dawned clear, with a few light cumulus clouds. The sea was smooth and visibility excellent. A light wind from the southwest enabled our carriers to launch and recover with a minimum of deviation from the course the Task Force was to follow most of the day.

At 0502 the Enterprise launched a search group of 18 scout-bombers, each carrying one 500-pound bomb. These were to search to a distance of 200 miles to the west between 180° and 360°. At 0645 one of these planes found an enemy force on course 270°, position latitude 29°33' north, longitude 174°30' east. This force was reported to consist of one battleship and five destroyers, but by a voice error "BB" was misunderstood as "CV", and it was at first reported to Admiral Spruance that the enemy force contained a carrier.

At about 0730 another plane reported by message drop a contact with two heavy cruisers and two destroyers, course 215°, speed 15, at latitude 28°55' N., longitude 175°10' E. This placed the second group about 50 miles southeast of the first. Our Task Force took as its target the group to the north which was not only closer but contained, as it was thought, a battleship. The southern group was left for attack by long-range planes from Midway.

At Midway the patrol planes took off as usual by 0430 on the morning of the 6th, searching the sector 220° to 330° to a distance of 600 miles. Visibility and coverage were excellent, but apparently the first information received at Midway was at 1030 when CINCPAC relayed to the island the contacts reported by the Enterprise scouts.

Several additional B-17's had been sent to Midway on the 5th and 6th, so that 26 were now available. This entire group was dispatched at 1145 to attack the enemy ships at the southern contact. Despite the excellent visibility, none of these planes found the enemy force. At 1640, a flight of 6 B-17's flying at more than 10,000 feet sighted a vessel about 25 miles east of the expected target. Identification of the type was difficult from that height. The first element of 3 planes dropped 4 bombs each, which seemed to hit the target, for it disappeared in 15 seconds.There was no attack signal and the second element did not attack except that the leader's two wingmen by mistake dropped bombs which fell wide of the now submerged target. Some pilots thought they had sunk a cruiser in 15 seconds.

Actually the "ship" was the submarine Grayling, which crash dived when the first bombs fell near her bow. Fortunately, she was not damaged. This was the only attack of the day by Midway planes.

Meanwhile, our Task Force had had considerably greater success. At 0757, soon after receipt of the second contact report, the Hornet began launching an attack group of 26 scout bombers. Eight fighters were sent too as a precaution against possible air opposition. This group found the enemy force without difficulty. To pilots it appeared to consist of a battleship, a heavy cruiser and three destroyers. Our planes attacked at 0950. The results were:

Since there was no air opposition our fighters occupied themselves by strafing the destroyers, probably causing very heavy casualties. One bombing plane was shot down by antiaircraft fire during the attack, but the rest returned safely to the carrier by 1045. At once they were refueled and rearmed in preparation for a second attack.

This Hornet attack was followed by one from the Enterprise. Between 1045 and 1115 this carrier put into the air scout bombers with one 1,000-pound bomb each, and 12 fighters for strafing. Soon after these planes were in the air they were instructed by radio to search for a battleship believed to be about 40 miles ahead of the group. They were told further that three torpedo planes were being sent to join them. The force maneuvered to await the torpedo planes, but contact with them was never made, and the torpedo planes did not take part in the attack. At 1200 the attack group passed at high altitude a force consisting of two heavy cruisers and two destroyers.Some planes attacked almost at once, but most of the group continued about 30 miles farther in search of the battleship reported to be ahead of the group. In spite of the excellent visibility no ship was sighted, and our planes returned to attack the main group. 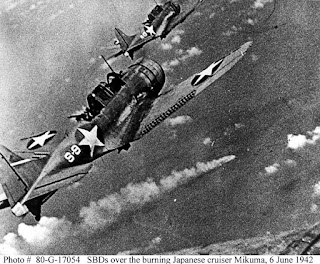 The planes which had first begun the attack had taken as their target the heavy cruiser to the east, probably the Mikuma. During this attack the vessels turned to starboard and so were heading north as our other planes approached. These planes came out of the sun from 21,000 feet and dove steeply on the target. Most took the heavy cruiser, but a few chose the "light" cruiser. Antiaircraft fire was heavy, but diminished after the first bomb hit. Altogether, five direct hits were made on the heavy cruiser, with two near hits. Admiral Nimitz writes as follows: "From the stories of survivors of Mikuma it appears that the first planes at 1140 hit and disabled the Mikuma and the last ones about 1300 finished her off when a bomb amidships detonated her torpedoes. The Enterprise group reported one CA as 'dead in the water, burning furiously with heavy explosions,' shattered and abandoned. If they had waited a few minutes their account would have been different. She keeled over and sank very soon after the last hit."
***
After the Enterprise group returned, the Hornet launched its second attack group of the day - and the last of the battle, as it turned out. This group of 24 scout bombers armed with 1,000-pound bombs took off at 1330 to attack the enemy force now 110 miles away on bearing 264° from the Hornet. At 1645 this group found and attacked an enemy force which pilots described as consisting of four ships, a heavy cruiser, probably of the Kinugasa class, a second cruiser about which there was uncertainty as to whether it was heavy or light, and two destroyers.
***


As you read through the narrative and its footnotes, the value of the airfield at Midway and the sea plane base there comes through strongly. Also remember that the U.S. aircraft carrier Yorktown and destroyer Hammann were torpedoed by a Japanese submarine on 6 June and both sank, Hammann immediately and Yorktown later:


Once the abandoned Yorktown's crewmen were safely recovered, her escorts departed, leaving behind the destroyer Hughes to keep watch. Early the next day, 5 June, a seaplane from the Japanese cruiser Chikuma spotted the drifting carrier. In mid-morning, Hughes discovered two injured men who had been left behind, rescued them and examined the ship. Later, the tug Vireo came on the scene and took Yorktown under tow, while working parties jettisoned boats and an anchor. However, the old tug could do little more than keep the big ship headed into the wind.

Several other destroyers arrived early on 6 June, carrying a salvage party of Yorktown crewmen. Boarding the carrier at daybreak, the men set to work pushing guns, aircraft and other removable weights over the side, counterflooding to reduce the list and performing the 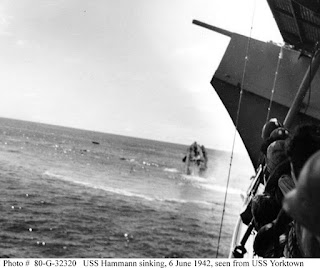 many other tasks involved in saving their ship. USS Hammann lay alongside to provide power, water and other assistance, while other destroyers patrolled nearby to protect Yorktown from intruders.

By mid-afternoon, prompted by the previous day's seaplane report, the Japanese submarine I-168 crept undetected into the area. Taking a submerged attack position, she fired four torpedoes, hitting Hammann and Yorktown amidships on their starboard sides. The destroyer went down in a few minutes. Many of her crew killed or badly injured in the water when her depth charges exploded as she sank. Vireo cut the towline, and the salvage party were taken off the now even-more-greviously wounded carrier. But she continued to float, and plans were made to restart work the next morning.