Battle of Midway: Marines, The Army Air Corps and Their Unsinkable Aircraft Carrier

This is the day in history is which we note that U.S. forces dealt the Imperial Japanese Navy a stunning 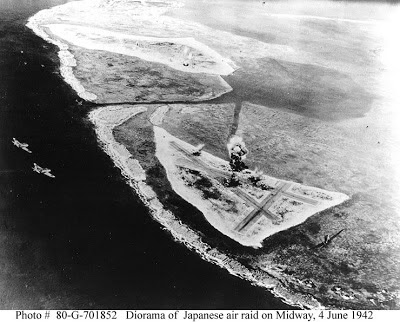 loss - sinking four aircraft carriers and, as the saying goes, "altering the course of the war."

It became the "Miracle at Midway."

On the other hand, calling it a miracle tends to make it sound like the Americans caught a lucky break when the wind shifted or something - it tends to neglect the preparations made to defend Midway and the sound battle plan that Admiral Nimitz and his staff developed - a pretty good description of which you can find here:


Nimitz’s strategy was direct and to the point; the Japanese’ involved operations that were to divert American strength from the main battle. Nimitz’s knowledge of the Japanese intentions and deployment of forces, however, meant that he had no need to employ diversions to keep the enemy guessing. Nimitz knew where the enemy was to be and employed what forces he had to be there to meet him; he had faith in his commanders: Fletcher, victor of Coral Sea, enjoyed his confidence, and Spruance had come highly recommended by Vice Admiral William F. Halsey, Jr., his commander during the early eastern Pacific raids. When Lt.Col. Harold F. Shannon,. USMC, commanding the USMC garrison at Midway, declared he would hold Midway, Nimitz sent him what reinforcements he could, and provided them to Comdr. Cyril T. Simard, who commanded the overall defense forces at Midway. Popular legend has made much of the Japanese having four carriers and the U.S. Navy three. Midway itself proved to be the equalizer, serving as base for long-ranged aircraft that could not be taken to sea – four-engined heavy bombers (B-17) and flying boats in sufficient quantity for reconnaissance and attack. Nimitz gave Midway “all the strengthening it could take,” exigencies of war dictating the numbers and types of planes employed.
***
Nimitz clearly possessed tremendous faith in his subordinates, who were nevertheless guided by very clear instructions. His principle of calculated risk is, perhaps, his most brilliant contribution to the battle, in that it precisely and economically conveyed his intentions to his task force commanders. There was no doubt about what they were supposed to do, how they were supposed to do it, and what level of risk was acceptable. Nimitz’s operations plan for the defense of Midway is a model for effective macro-management, spelling out essential tasks in general terms, with a minimum of detail-specific requirements. Nimitz’s plan for the Battle of Midway avoided long-range micro-management and allowed the commanders on the battlefield to make key operational and tactical decisions.
***
Although Naval War College analysts believed that plans needed to be formed in light of enemy capabilities and not intentions, something for which they castigated Yamamoto, Admiral Nimitz’s battle planning benefited enormously from having a very good notion of enemy intentions derived from excellent radio-intelligence. Such precise and economic employment of forces could not have occurred unless he possessed the ability to gather strategic intelligence on the enemy. Indeed, one can argue that the battle would never have taken place at all had Japanese intentions been cloaked in mystery.

Nimitz’s active preparations for the Battle of Midway indeed provided a momentous reception for the enemy, and once he had issued his operations orders, he entrusted the fighting of the battle to subordinates. Knowing your enemy is coming is one thing, but meeting him on the battlefield and defeating him, is altogether another. In the actions of 4-6 June 1942, those subordinates, from flag officer to fighter pilot, more than justified his faith in them. They had written, Nimitz declared afterward, “a glorious page in our history.”


When hoisting glass to the heroes of Midway, give a thought to the American's "fourth carrier" - the one with the mostly obsolete flying force - the Midway Atoll itself. A good description of the efforts of the Midway defenders is set out in USMC Operations in World War II: Decision at Midway:


The VMF fliers under Major Floyd B. Parks sighted the Zero-escorted Val dive bombers at 0616 about 30 miles out from Midway, and Captain John F. Carey, leading one of Parks' divisions in an F4F-3, launched the attack from 17,000 feet. The Marine fliers were hopelessly outnumbered, and they found that the Zero fighters could "fly rings around 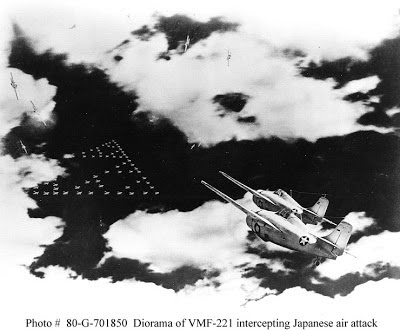 them." they had time for only one pass at the bombers, and then had to turn their attention to the swarm of Zeros, from one to five of which got on the tail of each Marine fighter. Only three of the original 12 Marine pilots survived this brawl, and although the damage they inflicted on the enemy has never been assessed, it is believed that they splashed a number of the bombers and some of the Zeros. Other Zeros were led into the Midway antiaircraft fire.

Meanwhile another group of 13 Midway fighters under Captain Kirk Armistead came in for an attack against the enemy air formation. Again the damage inflicted upon the enemy was undetermined, but fewer Marine pilots were lost. For better or for worse, however, the fighter defense of Midway had been expended, and the problem now passed to the antiaircraft guns on the atoll.

The first Japanese formation attacked at about 0630 from 14,000 feet. Antiaircraft fire knocked down two of these horizontal bombers before they could unload, but 22 came on through to drop their bombs. And just as these initial explosions rocked the two islands, 18 planes of the enemy's second wave came over for their strike. Since each of these Japanese formations had left the carriers with 36 planes, it is possible that the Marine fliers scored some kills.
***
Nagumo's mistake was a natural one for a commander who believed himself to be unopposed on a "field" of battle of his own choice. Lieutenant Joichi Tomonaga, the flight officer who had commanded the first attack wave against Midway, radioed during his return fight that "There is need for a second attack wave." Meanwhile, with Nagumo still ignorant of the U.S. fleet's presence in the vicinity, six American TBFs and four B-26s from Midway came in to attack his ships. This convinced the Japanese admiral that Tomonaga was right, and he sent below to hangar spaces the 93 planes he had kept spotted for strikes against possible surface opposition. These planes were to be re-armed with bombs for the second strike. Then Nagumo called in the returning planes to arm them for the new attack on the atoll. While his men were involved in this work on the flight deck and in hangar spaces, Nagumo got the belated word from a Tone search plane that U.S. ships, including at least one carrier, were in the area. This caused another change of mind, and the admiral ordered the planes' ordnance changed again, from bombs back to torpedoes with which to attack the surface ships. But this decision was just tardy enough to allow Spruance to catch him with his planes down, and with torpedoes and bombs strewn in great confusion about the hangar deck.38

Meanwhile, as Nagumo vacillated, Admiral Nimitz's orders for Captain Simard to "go all out for the carriers," while Marine antiaircraft batteries worried about Midway, were under execution. VMSB-241, like the fighter squadron, had divided into two striking units, the first composed of 16 SBD-2s led by Major Lofton Henderson, and the second of 11 SB2U-3s commanded by Major Benjamin W. Norris. Hendersons' group climbed to 9,000 feet to locate the enemy carriers, which were then undergoing the attack from the TBFs and the B-26s. Fliers of this group sighted the Japanese ships at 0744, but as the SBDs spiralled down they were set upon by swarms of Nakajima 97s and Zeros flying air cover, which were soon reinforced by more fighters from the carriers below. Henderson and several other were shot down (only eight of these planes got back to Midway) and the strike scored no hits although some were claimed.
Next came an attack by 15 B-17s led by Lieutenant Colonel Walter C. Sweeney, USA, but again claims of hits were optimistic. And as these Flying Fortresses pulled away, Major Norris came in with his 11 Vindicators which had taken off with Henderson. Beset by the Zeros, Norris turned to the nearest target at hand, and the Marines crowded their ancient planes into a standard glide run almost on top of the Japanese battleship Haruna--previously claimed as an Army B-17's victim off Luzon. Some of the fliers also went after the Kirishima, which was nearby, but neither attack managed any hits. Three Marines were shot down, and the group was credited with splashing two enemy fighters, plus two probables.40

By 1100 all surviving Marine aircraft had made their way back to he atoll where all hands grimly assessed the battle's damage and prepared for subsequent action. Of the VMF-221 fighters which had gone in against the attacking Japanese planes, only 10 returned, and of this number only two were in shape to leave the ground again. Thirteen F2A-3s and two F4Fs were missing, along with the eight craft lost from the Henderson group and the three shot away from the Norris force. Slick black smoke from oil fires billowed up from the islands, and ruptured fuel lines left more than two-thirds of the aviation fuel temporarily unavailable. Gasoline had to be sent to the field from Sand Island, and hand-pumped from drums. The Marine ground defense force had sustained 24 casualties, and four ordnance-men of VMF-221 had been lost to a direct bomb hit.

At 1700 a burning enemy carrier was reported 200 miles northwest of Midway, and Major Norris prepared VMSB-241's six operational SBD-2s and five SB2U-3s for a night attack. The planes took off at 1900, but could not find the carrier. Major Norris failed to return from this mission, although the other pilots managed to home by the light of oil fires and the antiaircraft searchlights which were turned up as beacons.41 Meanwhile, the Battle of Midway had been decided at sea in a fight of carrier aircraft.

The Marines and Army Air Corps on Midway did their share - flying from their "unsinkable" aircraft carrier.