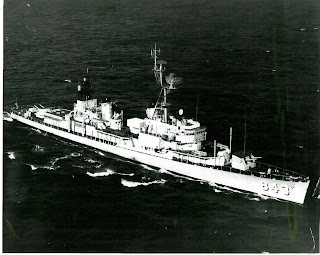 After Korea, before the mines of the Arabian Gulf hit Samuel B. Roberts, Princeton and Tripoli, one ship* of the United States Navy took a couple a mine hits and, through heroic effort her crew, was brought into port afloat and with no loss of life. Perhaps because the incident was deemed one of "friendly fire" (the ship was either in the wrong place or the mines were not where they were supposed to be), less is heard of the saving of USS Warrington (DD-843) in July, 1972.

Warrington was an East Coast destroyer, a FRAM Gearing-Class, completed shortly before the end of WWII. Brought through the Panama Canal to help with Naval Gunfire Support off Vietnam, following the Easter Invasion by the North Vietnamese down the South Vietnamese coast. On July 17, 1972, Warrington had been on the gun line in the morning.

As part of Operation Pocket Money, much of the navigable water of inshore North Vietnam had been mined by aerial mining:

As you might imagine, some mines may not have ended up exactly where intended.

Warrington may have stumbled upon a couple of such outlier mines:


USS Warrington was irreparably damaged when it detonated what was believed to be mislaid mines 20 miles (32 km) north of Đồng Hới on 17 July 1973. (ND E1: Wrong date by a year Wikipedia!)

There were a small number of injuries to the crew, resulting in the award of 5 Purple Hearts.

Assistance from other ships, fleet tug arrives, tows the ship to Subic Bay. In Subic, at the ammo piers, she is brought alongside USS Pyro (AE-24) where the Pyro crew feed them warm food and help off-load Warrington's munitions.

Warrington then heads to the drydock and the decision is made that she is not worth repairing. She is sold to Taiwan and her parts cannibalized.

Sure, no one died - but the crew of Warrington deserves a great deal of credit. And, after all these years, a little praise for a job well done.

Photos from the various sites linked herein. They are worth a visit.


*There is an indication here that USS King (DLG-10) also had a mine strike during the Vietnam War, but a time line of the King's operations makes no reference to a "mine strike" although it is reported here that she had a boiler casualty in 1969, well before the mining operation. Neither is there a report, of USS John King (DDG-3) ever hitting a mine during the 1972-3 time frame. Dr. Truver has far more expertise in such matters than I do, but I know for a certainty about Warrington.
Posted by Mark Tempest at 6/30/2013 09:26:00 PM