CDR Salamander does the Full Monty of exposing the "The LCS Full Court Press".

Think continued funding and all will be as clear as The Emperor's New Clothes.

Well, as for me, I enjoy a fast ship as much as the next old SWO, but I think we ought to have some truth in advertising.

The single most valuable and powerful weapon system currently available to the LCS is . . . the MH-60 helicopter.

It seems to me then, the most powerful LCS is not the high speed little launch platform in the foreground of the picture below, but that big, slow thing next to it, which could hold a whole lot more MH-60's (with different mission packages) and other things like Marine Sea Cobras (which reminds me - why doesn't the Navy have it own Sea Cobras?). 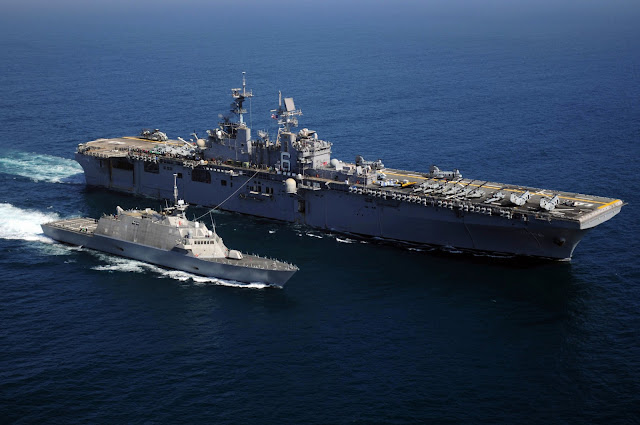 I mean, if you want high speed and the ability to operate in the shallow waters of the world, those helicopter things work pretty well. And they don't cost $300 million each.

And if you want to go fast and look scary in shallow water, there is a school of thought that says you ought to explore this old technology: