look at a GAO report on the "evolving" LCS saga - and what seems to amount to "reverse capability creep":


Particularly galling to some in Congress is the report’s Table 5 – “Evolution of Navy Statements About Littoral Combat Ship Capability,” which chronicles the changing narrative of the ship’s concepts and capabilities.

What the table shows, Congressional sources say, is how the Navy has changed its tune throughout the program – so much so, that it may be difficult to trust what service officials have to say now, especially in light of some of the unknowns highlighted in the other tables detailing potential factors that could affect LCS costs and operations.

Here’s the gist of the GAO report Table 5:

Early (2004-2008): Primarily developed for use in major combat operations. Will gain initial entry and provide assured access—or ability to enter contested spaces—and be employable and sustainable throughout the battlespace regardless of anti-access or area-denial environments.

Current (2011-2012): Current LCS weapon systems are under-performing and offer little chance of survival in a combat scenario. Not to be employed outside a benign, low-threat environment unless escorted by a multi-mission combatant providing credible anti-air, anti-surface, and anti-submarine protection.

Concept: How LCS will deploy 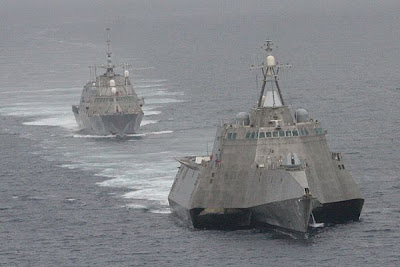 Current (2011-2012): Lacks the ability to operate independently in combat. Will have to be well protected by multi-mission combatants. Multiple LCSs will likely have to operate in a coordinated strike attack group fashion for mutual support.

Concept: How mission packages swaps will be utilized

Early (2004-2008): Mission packages will be quickly swapped out in an expeditionary theater in a matter of days.
Current (2011-2012): Though a mission package can be swapped within 72 hours if all the equipment and personnel are in theater, swapping out mission packages overseas presents manning and potentially expensive logistical challenges. An LCS executing a package swap could be unavailable for between 12-29 days, and it may take 30-60 days or more for equipment and personnel to arrive in theater.

Somebody has some 'splaining to do.