Narrow seas, unseen mines, punitive expeditions, and "come as you are" ASUW on the sea and in the air. 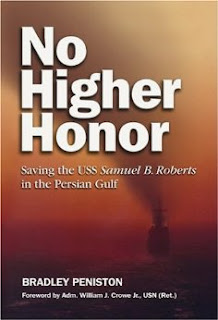 Yes, it has been a quarter-century, but little has changed since the USS SAMUEL B. ROBERTS (FFG-58) struck a mine, and in retribution, the US Navy launched Operation PRAYING MANTIS.

The tactical and operational aspects of each, as well as combat leadership, remain constant even while the tools may have changed a bit.

To discuss this an more, our guest for the full hour will be BRAD PENIST0N, author of No Higher Honor: Saving the USS Samuel B. Roberts in the Persian Gulf, recently released by the Naval Institute Press in paperback and on Kindle.

Join us live or listen later by clicking here.