Seems like every super heavy rain storm that creates street flooding comes with a few things:
(1) People who insist in driving into water that is clearly too deep to successfully cross, or who really don't know what they are driving into;
(2) A smaller collection of thrill seekers who insist on driving their four wheelers through flooded streets, for the thrill of the "big splash" they create; and
(3) A television crew nearby capturing these folks as they hit the water.

So, here's the question: "is it safe do drive through flooded streets?"

Well, probably not. As noted at NOAA's Turn Around Don't Drown:


Each year, more deaths occur due to flooding than from any other severe weather related hazard. The Centers for Disease Control report that over half of all flood-related drownings occur when a vehicle is driven into hazardous flood water. The next highest percentage of flood-related deaths is due to walking into or near flood waters.Why? The main reason is people underestimate the force and power of water. Many of the deaths occur in automobiles as they are swept downstream. Of these drownings, many are preventable, but too many people continue to drive around the barriers that warn you the road is flooded.


Most flood-related deaths and injuries could be avoided if people who come upon areas covered with water followed this simple advice: Turn Around Don't Drown®.

The reason that so many people drown during flooding is because few of them realize the incredible power of water. A mere six inches of fast-moving flood water can knock over an adult. It takes only two feet of rushing water to carry away most vehicles. This includes pickups and SUVs.

If you come to an area that is covered with water, you will not know the depth of the water or the condition of the ground under the water. This is especially true at night, when your vision is more limited.

Play it smart, play it safe. Whether driving or walking, any time you come to a flooded road, Turn Around Don't Drown®

Pretty good description of wrong thinking on the part of drivers here: 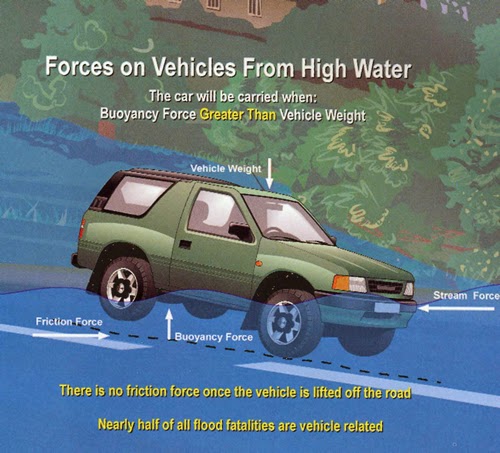 Why do vehicles float? They float for the same reason a 97,000 ton aircraft carrier floats, buoyancy!

Where does this idea that "my heavy vehicle will keep me safe" come from? It comes from the false trust in the weight of the vehicle you are driving.

Many believe their 3,000 pound or more vehicle will remain in contact with the road surface, that it is too heavy to float. Think about that for a moment. Aircraft carriers weighing 97,000 tons float.

Vehicles, including ships, float because of buoyancy. In fact, most cars can be swept away in 18-24 inches of moving water. Trucks and SUVs do not fare much better with an additional 6-12 inches of clearance.

Flood waters will recede eventually. The results of heading into flood waters? They may last a shortened life time.