Roundup of Piracy, Sea Robbers, Kidnappers and Hostage Takers- 22 May 14

From the good folks at the U.S. Office of Naval Intelligence (ONI)and their World Wide Threats to Shipping report for 22 May 14, a reminder that there is a threat to yachts, no matter where they are:

1. (U) DOMINICA: On 3 May, two men boarded a 43 foot sailing yacht moored south of Roseau and assaulted the owner and passenger onboard. One of the robbers attacked the boat owner while the other attempted to assault the passenger, who used mace on her attacker. At that point, the robbers fled the boat. The crew of the yacht untied from the mooring point in the harbor and departed the area after attempting to contact local authorities, who did not respond. (www.noonsite.com)
****

2. (U) PHILIPPINES: Two German citizens living in the Philippines were reportedly kidnapped in late April from their sailing yacht CATHERINE near Palawan Island while on an island-hopping trip, according to police and press reports. They are reportedly being held by members of the Abu Sayyaf Group, along with two other Europeans taken by the group in 2012. (www.noonsite.com, and www.abs-cbnnews.com)


More trouble in and off Nigeria:


1. (U) NIGERIA: On 13 May, two robbers boarded an anchored tanker near position 04:45N – 006:59E, Port Harcourt Anchorage. The robbers took two crewmembers hostage and threatened them with knives. The robbers released the crewmembers after stealing mooring ropes. Upon release, the crew raised the alarm and mustered on the bridge. While mustered on the bridge the crew smelled cargo gas and noticed a small craft alongside the vessel near the bow stealing cargo. Nigerian Navy contacted and ships in the vicinity warned on VHF Channel 16. The Navy responded by sending a small speed boat, which circled the vessel and then left. Robbers escaped and all crew safe. (IMB)
2. (U) SIERRA LEONE: On 5 May, two robbers armed with knives boarded

a berthed bulk carrier at position 08:29N - 013:13W, Berth No.2, Freetown Port. The robbers took hostage the duty cadet on rounds. They then stole the aft mooring ropes before releasing the cadet and escaping. On being released the cadet informed the duty officer who raised the alarm. (IMB)
3. (U) NIGERIA: On 4 May, three Dutch citizens and two Nigerian citizens were kidnapped near the settlement of Letugbene, a river community in Bayelsa State. The group was reportedly touring the area to promote work on a local hospital. They reportedly had local guides, but not an armed escort. Up to ten heavily armed bandits were involved in the kidnapping, utilizing several speedboats. The Nigerian citizens were later released, but the Dutch citizens are still being held. (Premium Times of Nigeria)

On the good news front, the NATO Shipping Center's Daily Piracy Update has this map of activity in the area where Somali pirates were once very active: 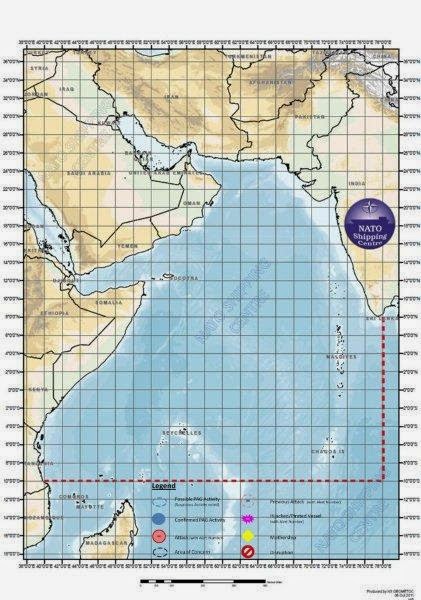 What with Chinese, U.S., NATO, EU, Japanese and other naval forces out there in the area around Somalia and the number of armed security teams riding merchant ships, the pirates finally may be outnumbered and certainly have been tamped down. Of course, it might be they are afraid of the mighty Iranian counter-piracy force which, according to the perhaps biased FARS News, has dominated the area:


“In the last three years, around 3,000 cargo ships and oil tankers have been escorted by the Navy’s commandos and vessels,” Commander of the Iranian Navy’s Missile Program Admiral Ali Vafadar told FNA.
He also said that pirates' attempts to hijack 147 cargo ships and oil tankers in international waters have been aborted due to the timely action of the Iranian warships deployed in the region.
Vafadar said that the Iranian naval forces have also managed to seize control of a number of pirate boats and vessels, arrest their crews and transferred them to Iran to stand trial for their crimes.
The Iranian Navy has been conducting anti-piracy patrols in the Gulf of Aden since November 2008, when Somali raiders hijacked the Iranian-chartered cargo ship, MV Delight, off the coast of Yemen.
The Iranian navy has been developing its presence in international waters since 2010, regularly launching vessels in the Indian Ocean and the Gulf of Aden to protect Iranian ships from Somali pirates operating in the area.

Those remarks were made in December 2013. It is interesting to take a look at Somali pirate activity in recent years. Here is a table from the ONI Piracy Analysis and Warning Weekly for 22 May 2013:

The Iranians seem to be finding a lot more trouble out there than the rest of the world's naval vessels and commercial shipping.
Posted by Mark Tempest at 5/22/2014 10:39:00 AM