Disaster Prep Wednesday: Be Ready to Be on Your Own Because Logistics 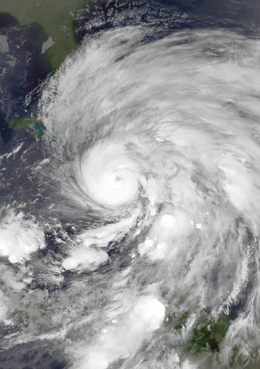 Here's a disturbing report on a certain -uh- lack of preparation on the part of one of the primary responders to disasters:  "The Red Cross’ Secret Disaster".

Some of the "issues" reported are over-blown, some not - but you should read it all.

As you read it, remember that the Red Cross does not have a hard core of professional responders it calls on for a disaster - instead, it relies on people volunteering to go to a disaster location and offer their services. Some of these volunteers are quite good and are experienced and well-trained. Many others may not be experienced, well-trained or, even if well-trained, not placed in jobs for which they are trained. So if you read about an "shelter leader" who was trained - but in his first lead role, don't be shocked. The Red Cross must use the volunteers it has who volunteer for a particular disaster. You go to a disaster with the volunteers you have.

Many of these volunteers are retirees who now have the time and willingness to go to a disaster area for a few days or even weeks. They may get meals and a place to sleep, but they aren't getting paid to lend a hand. Don't misunderstand me, when you work with these volunteers, you will be impressed by how sharp and committed most of them are.

But it should shock no one that a large entity - highly dependent on volunteers - and yet operated under a bureaucracy of paid workers may have certain command, control, training, logistics and prioritization issues. Like any other big enterprise it also has its full share of idiots and incompetents. 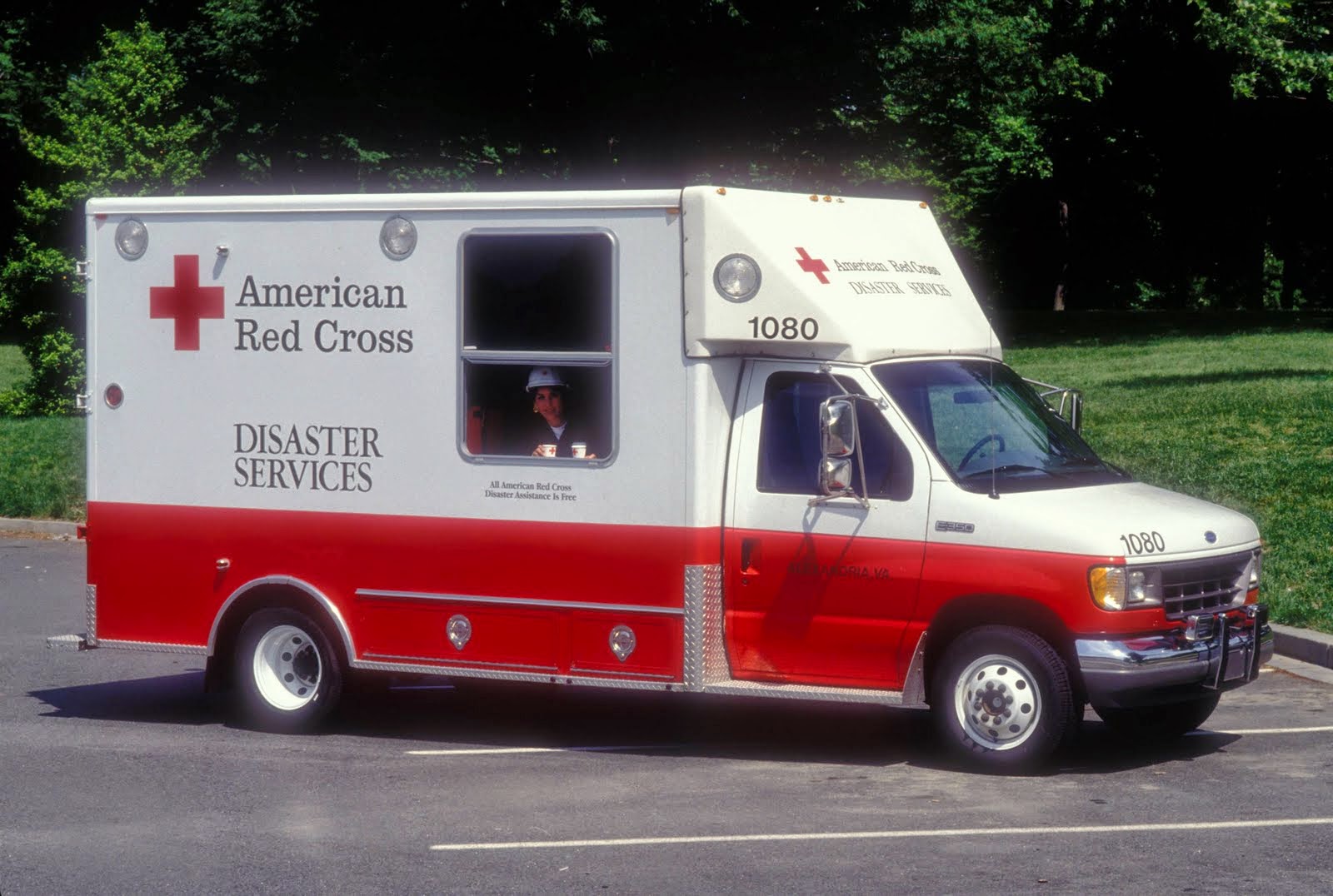 Yes, the Red Cross is run by human beings and is subject to the same pressures as any other big organization. If you want perfection in execution, you need to look elsewhere, but for the most part,  Red Cross volunteers get the job done - within their limitations of time and money.

Given those limitations, let's just say you should read the article and then make plans for your disaster preparation based on being on your own for several days, a topic which I have addressed here before several times.

Why can't there be an instant response to serving every afflicted person in a major disaster? As often stated here: logistics, logistics and then logistics. 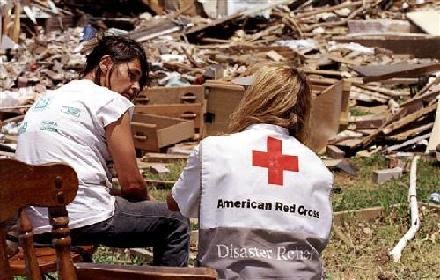 Disaster response takes time to organize - to assess the extent of the damage, to assess the available access routes to the scene, to assess the level of response needed for each afflicted area. Only once the damage assessment is made can demands be placed on the logistics system to attempt to meet the needs of those impacted by the disaster. In a perfect world, the damage assessment (DA) is done within a couple of days - but it may take longer because the DA volunteer teams may have their access to affect areas limited by damage to the areas impacted. There may also be political pressure brought to deliver aid to areas that have some constituency that "demands" attention - even if a DA survey would indicate many other areas far worse off. You might blame local politicos for grandstanding in some such case. Photo ops do nothing for the victims.

In other words, conflicting demands can derail logistic efforts. 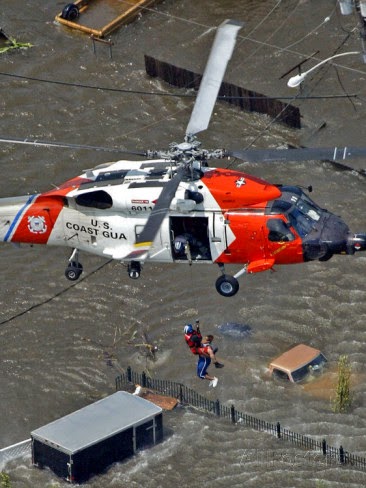 The other side of disaster relief is the failure of people living in areas predicted to be impacted to leave the area before the storm (for example) hits. Having people trapped in areas without water, food or electricity challenges the Red Cross feeding programs - since there have to be assessments of the numbers so trapped to order up the right mix of food, water and other necessities to load onto trucks to get to the afflicted areas. Easier in a town of 4000 hit by a tornado than dealing with tens of thousands in the coastal New York/New Jersey area following a hurricane.

The larger the number of people who have failed to take themselves out of the problem area, the bigger the logistic nightmare trying to get them help. If they had taken some steps to mitigate their risk by laying in some water and food, as the Red Cross and everyone else in the disaster response world suggest, then their circumstances might be less dire.

However, if you rely on someone else to take care of you - you are at the mercy of the "helper's" schedule and availability.

The Red Cross is not in the "rescue you from your own failure to help yourself" business - it is in the business of helping to shelter and feed those who avail themselves of that service and offering some assistance in recovery. It is not an insurance company and is not designed to put you back as you were before the disaster.

When governments fail to evacuate elderly residents of public housing high rises before a storm hits and then is surprised that they are trapped on upper floors, that is not a Red Cross issue. Nor is it really a Red Cross issue if wheel chair needy elderly are delivered to shelters without their wheel chairs. Red Cross shelter kits do not generally come with such equipment - which means there will be delays (as noted in the article) in finding wheel chairs and getting them to the appropriate shelter. If you don't like the way shelters are operated - come on and join the Red Cross volunteers who work in Mass Sheltering - I'm sure they will appreciate your help and ideas.

So what's the point of this? To remind you that disasters are an everyday part of our lives on this planet and that your preparation for disasters is your own responsibility - not that of the government,  the Red Cross, or FEMA or any other agency or person.

Even the best run disaster relief process takes days, not hours, to put in place and get going. You need to be ready to be on your own -
2. Take care of your own disaster logistics - have a disaster kit: 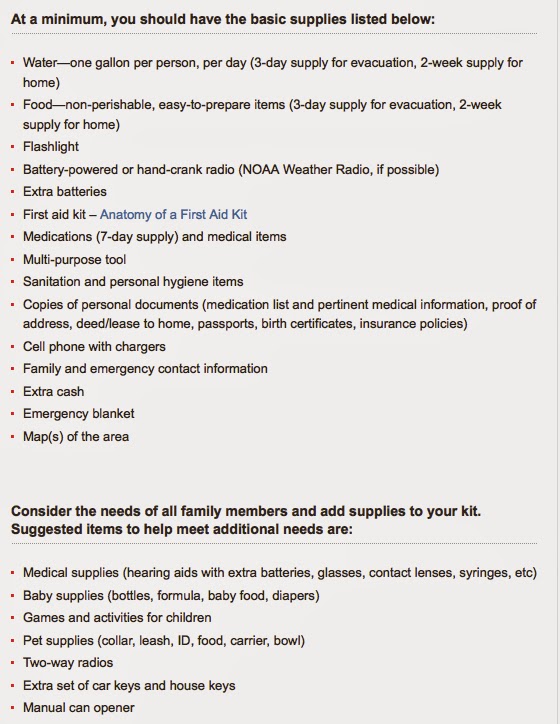 Okay, those are the basics.

Which will take some of the burden off organizations like the Red Cross.