The Vietnamese tanker that was reported missing here has been now released by pirates:


The Vietnam-flagged oil tanker that vanished from radar last week is heading to the southern port of Vung Tau after being freed by pirates.

Deputy Captain Pham Van Hoang told VOA’s Vietnamese Service Thursday that he believed Indonesian pirates carried out the attack on the ship called Sunrise 689 shortly after its departure from a port in Singapore.

“Masked pirates speaking the Indonesian language stormed the vessel," said Pham. "They were armed with knives and guns. They hit us and pointed their guns at the captain, then restrained and pushed us all into a room."

He said pirates took about 2,000 tons of oil products, nearly a third of what the ship was carrying, before releasing the ship. Two of the vessel's 18 crew were injured.

Nguyen Vu Diep, official from the company which owns the vessel, told VOA’s Vietnamese Service that he was told of the hijacking.

“Two crew members were injured but are not in serious conditions," said Nguyen. "The pirates destroyed all the communications and navigation machines, so the sailors did not know where they were when they were released."

Sounds like the ship's Automatic Identification System might have been turned off, thus concealing its identity on radar, but I'm pretty sure it still returned an radar echo until it was over the radar horizon or shielded by an island. However, in the crowded waters off Singapore, it would be easy to lose a ship of that size without AIS operating. More on AIS here. That Coast Guard image is of the lower reaches of Galveston Bay.

The ICC Live Piracy Report on the incident (not the variation on crew injury): 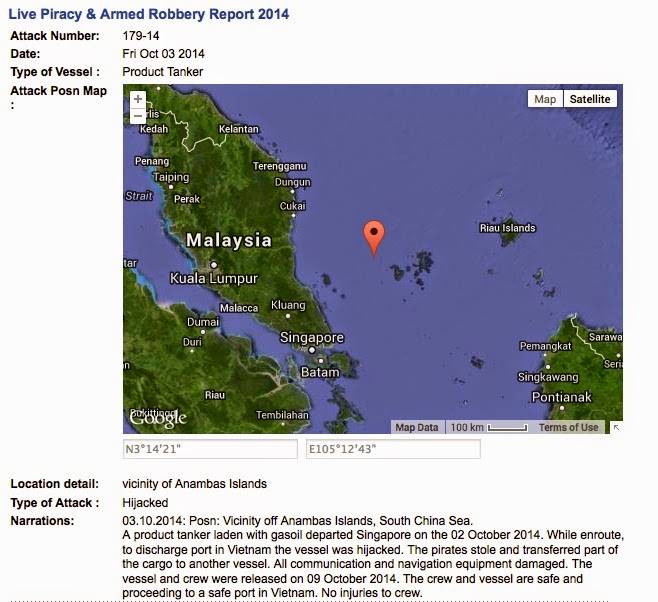 Something like the 12th hijacking in that region this year.