North Korea: Kim Jong-un Limps Back into the Light 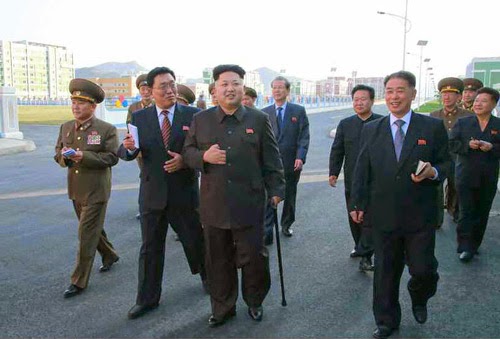 Apparently a rock got kicked over in the "Democratic" Peoples "Republic" of Korea (aka DPRK Thugocracy) and the current Kim in Power KJU reappeared, a reported here:


North Korean leader Kim Jong-un has resurfaced after a month-and-a-half out of the public eye that gave rise to wild speculation about his health.

The North's official Korean Central News Agency on Tuesday reported that Kim inspected a newly-built housing complex for scientists. He was leaning on a stick.

Speculation runs to gout, diabetes, heart disease and massive corruption designed to keep the DPRK ruling class in power. But in the land of big hats and awful haircuts, who knows?

Also unknown is whether his appearance means the possibility of an early winter or mass starvation for the residents of the DPRK. Well, the latter is a pretty sure thing - though it looks like KJU won't be affected much.
Posted by Mark Tempest at 10/14/2014 10:55:00 AM