Energy Policy: What "Green Jobs" Revolution in the U.S. Economy?

Too bad this editorial Green jobs fading from the 27 Oct 14, Oil And Gas Journal is hidden behind a subscription wall because more Americans need to be aware of the expensive sham of alleged "green energy" jobs that has cost them billions:


While campaigning for election to his first term, President Barack Obama promised to create 5 million green jobs in 10 years. Once in office, he maneuvered Congress into passing the American Recovery and Reinvestment Act (ARRA) of 2009, a $840-billion spending spree that included about $90 billion for energy and, of course, green jobs. Results have not been spectacular. In fact, they testify to core problems of governmental profligacy.
***
So how many green jobs did the munificent government create with AARA energy money? An administration proudly dedicated to transparency must find that question disturbing.

In March 2013, the Bureau of Labor Statistics, part of the Department of Labor, reported employment associated with production of green goods and services in 2011 amounted to 3.4 million jobs. That was an increase of 158,000 jobs from the prior year, corrected in both cases to account for adjustments in estimation methods. But what jobs were being counted? The BLS explained its definitions and methods elaborately. By the time it issued its report for 2011, however, the validity of those methods had been shredded.

In a June 6, 2012, hearing of the House Committee on Oversight and Government Reform, Chairman Darrell E. Issa (R-Calif.) elicited an illuminating sequence of confessions from acting BLS Commissioner John Galvin, now deputy commissioner. A person could be counted by BLS as holding a green job, Galvin had to admit, if he or she swept floors in a solar-paneled facility, drove a hybrid bus in public transportation or even a school bus, pumped fuel into a school bus, worked in a bicycle shop, sold recycled goods in an antique store or Salvation Army outlet, or collected garbage. These revelations discredited official numbers, formerly flaunted, about green jobs. Responding to spending cuts mandated under sequestration provisions of the Balanced Budget and Emergency Deficit Control Act, BLS made its green-job report for 2011 the last.

Program troubles didn't end there. In June last year, the Government Accountability Office raised questions about the $501 million of targeted ARRA funds Labor spent on training for green employment. Required by the statute to act quickly, GAO said, Labor implemented several programs simultaneously. "As a result," it said, "in some cases Recovery Act training programs were initiated prior to a full assessment of the demand for green jobs." And in this program, too, definitions were flexible. According to GAO, "Labor created its green jobs definitional framework to provide local flexibility, and grantees we interviewed broadly interpreted Labor's framework to include any job that could be linked, directly or indirectly, to a beneficial environmental outcome."

At the time of the GAO report, incomplete data made results of the training effort uncertain. Information from grant recipients reporting final outcomes indicated slightly more individuals than projected had received training, GAO said. But job placements were only 55% of the target level.

Let me direct you to this series of articles (full disclosure they written by my brother, a long-time reporter for the L.A. Times) on one example of "stimulus money" gone awry:


. . . the federal Department of Energy in 2009 and 2010 pitched in with $9.9 million in stimulus grants — part of the Obama administration effort to create jobs and revive the American economy.

To date, however, not one of the proposed North American Power Group plants has been built. The stimulus grants — ostensibly to study carbon sequestration potential on the Two Elk site — were suspended by the DOE in January 2012 because of numerous accounting irregularities.

But that was not until $7.3 million of the stimulus money had already been spent, much of it on inflated salaries . . .

In the meantime, job growth largely fueled by the private energy industry due to fracking and the development of shale gas sites has been significant:

The U.S. Bureau of Labor Statistics kindly produced the following chart on such job growth: 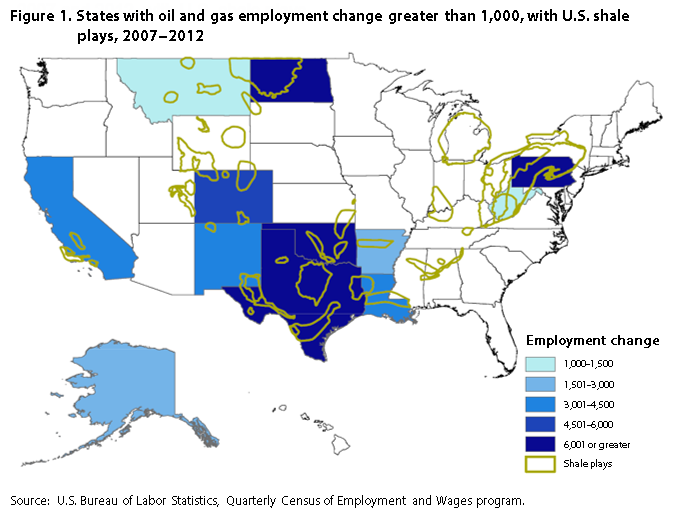 You might note those are just jobs in the "oil and natural gas industry" and does not, apparently count jobs of people in industries who provide services to those oil and gas workers. Heck, if you count floor sweepers, motel clerks, school bus drivers, etc, those numbers might even be higher.

And, before you go off on the hazards of "non-green" energy (which I would assert you need to be careful in doing when natural gas is involved), you might be interested in the huge pollution bomb that is China:


China's emissions already exceed the US and EU combined, it emits more per capita than Europe and could overtake America by 2017.

Well, of course, there is a big capita difference involved.

Can you say "misguided" and ""unsupervised?" That seems to be the theory behind throwing "green job" stimulus money around. If you need to review it, there's a pretty good look at the $535 million Solyndra Scandal from the Washington Post:


Meant to create jobs and cut reliance on foreign oil, Obama’s green-technology program was infused with politics at every level, The Washington Post found in an analysis of thousands of memos, company records and internal ­e-mails. Political considerations were raised repeatedly by company investors, Energy Department bureaucrats and White House officials.

Sure, old news. But we are still paying for it - especially, I would argue, in the reduced funding for national security matters, including readiness.

UPDATE: Changed link to Rone Tempest Wyofile articles to give you the best possible access.
Posted by Mark Tempest at 10/30/2014 11:07:00 AM