Okay, Ebola has reached the U.S.

Given the media coverage, it is difficult to believe that only 6 people have been or are undergoing treatment for the virus inside America, all of whom contracted the disease overseas.

See this NYTimes report. How Many Ebola Patients Are Being Treated Outside of West Africa? and the chart below liberated from there:

Africa stats are not as good as this NYT chart shows:

But, even under far worse health conditions than those in the U.S., more than half the people infected have survived. And, as stressed here:


Symptoms generally occur abruptly eight to 10 days after infection, though that period can range from two to 21 days, health officials say.

Air travelers must keep in mind that Ebola is not transmitted through the air, said Dr. Marty Cetron, director of the CDC's Division of Global Migration and Quarantine.

"There needs to be direct contact frequently with body fluids or blood," he stressed.

It is a serious disease. But it is a preventable and treatable disease.

Don't allow yourself to fall into a media induced panic.

Which is the point of this post - that the media in disaster situations can be a great boon or a great detriment to the public.


Much media coverage of the nuclear component of Japan’s ongoing earthquake and tsunami tragedy has lacked objectivity and proportionality, compounding already high public anxiety and confusion levels. Excessive attention has been directed to hypothetical radiation dangers relative to the enormous scale of broader havoc wrought by those incredible once-in-three-century natural disasters. Realistic risks have often been exaggerated by poorly informed reporters, along with alarmist agenda-driven commentators presented as experts.

Is it sometimes worse to underplay potential hazards and consequences than to err on the side of caution? Perhaps. But unfounded, panic-evoking, worst-case conjectures are unwarranted and irresponsible.


Given that everything now seems to be a news-driven "crisis," is it possible that we face a "boy who cried wolf" situation, in which people have heard so many dire warnings that they begin to ignore or downplay them? See Does severe weather hype make people under-react?:


That's not to mention the way in which potential weather events are described. Reporters, government officials and experts who use terms like "catastrophic," "historic," and "unprecedented" to describe a storm without explaining just what makes a particular weather system unique do nothing but water down the gravity of these words. There are only so many times one can hear that a particular storm is the "big one" before he stops heeding warnings all together

Cited in the prior link is an excellent article from the WaPo's Erik Wemple, Hurricane Sandy: Five tips for avoiding hype:


Exaggeration has huge consequences, as WJLA’s Ryan notes. “People get unnecessarily frightened and they’re preparing for something that is really terrible and then it doesn’t happen, and then the next time you say it’s a catastrophic storm and they say, ‘We don’t believe you,’” says Ryan.

I think we've seen this effect present on people who decide to "ride out" hurricanes on barrier islands - especially in areas where prior media warnings of "dire" storms have come to naught. 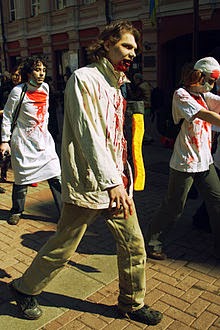 My point is, of course, that just as it should be incumbent for news agencies to report news of things like approaching storms accurately and with less hype, it is also the role of an informed citizens to learn to weed through the "Nancy Grace" hysteria and make realistic assessments of the threats to their own situations.

It is extremely unlikely that any one of us will ever come in contact with an ebola virus carrier.

It is far more likely that some of us may be involved in a car wreck, a thunderstorm, an earthquake, a home fire, a blizzard, a tornado or a hurricane.

As I have suggested before, your disaster preparation needs to be based on the more probable things that could impact your life. That, despite the excitement of thinking about the horror of it, likely does not involve either ebola or zombies. Sorry.
Posted by Mark Tempest at 10/08/2014 12:40:00 PM