I seem to remember certain people yukking it up back in the last presidential election because of this: 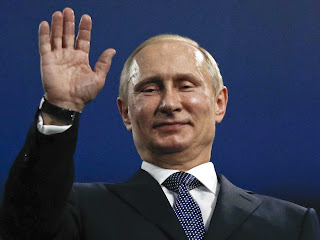 Russia presents the greatest threat to U.S. national security and its behavior is "nothing short of alarming," Marine General Joseph Dunford told lawmakers on Thursday as they weighed his nomination to become chairman of the Joint Chiefs of Staff.

Dunford also added his voice to those Pentagon officials who have supported providing lethal arms to Ukraine to help it defend itself from Russia-backed separatists, a step that President Barack Obama has so far resisted.

"My assessment today, Senator, is that Russia presents the greatest threat to our national security," said Dunford, the Marine Corps commandant, who is expected to swiftly win Senate confirmation to become the top U.S. military officer.

Relations between Moscow and the West have plunged to a post-Cold War low since Russia's intervention in Ukraine upended assumptions about the security of NATO's eastern flank.

"If you want to talk about a nation that could pose an existential threat to the United States, I'd have to point to Russia. And if you look at their behavior, it's nothing short of alarming," he said.