Two great victories in the Civil War were concluded in early July 1863. The long siege of Vicksburg, July 4 Mississippi was resolved : 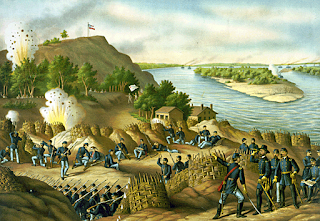 Soldiers and civilians alike endured the privations of siege warfare for 47 days before the surrender of Pemberton’s forces on July 4, 1863. With the Mississippi River now firmly in Union hands, the Confederacy's fate was all but sealed.

Of course, by July 3, 1863, the Union armies squeaked out a victory over secessionist invaders at Gettysburg, Pennsylvania. The Confederate army never ventured north again, and Grant was brought in from the western front to take on Lee in attempting to break through to Richmond.

Vicksburg cut the Confederacy in two and greatly hindered the Confederates' logistics. Gettysburg ruined Confederate hopes for some sort of negotiated peace.
Posted by Mark Tempest at 7/04/2015 02:24:00 PM