Captured pirates respond to a survey "warships are a primary deterrent" to their going back to their previous field of work, reports DefenceWeb:


*** International naval presence was frequently reported as a concern or as making a significant contribution to deterring pirates. The same was true for armed guards aboard vessels, although to a lesser degree than the presence of warships. ****

Not too shocking - while private guards warn would-be pirates off with warning shots, warships tend to arrest them and arrange to have them thrown into jail. Also not too surprising, these incarcerated pirates took up piracy because they were poor and had few prospects ashore and they don't like being in prison. The flaws in the UN survey are discussed in the article.


According to a recent report from the International Chamber of Commerce (ICC) and International Maritime Bureau (IMB), since the start of 2015, Southeast Asia has accounted for 55 per cent of the world’s 54 piracy and armed robbery incidents. According to these statistics, Southeast Asia has regained the reputation as the region in the world most afflicted by piracy. 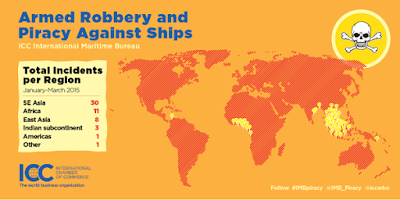 Seems to be mostly based on the the first quarter of 2105 statistics and news releases like this One coastal tanker hijacked every two weeks in SE Asia , which is a variation of piracy in that most of those hijacked ships have all or part of their cargo pumped off into a "pirate" vessel and then the hijacked ship is released. Call it "cargo piracy."

Whatever you call it, here's a map extracted from the IMB's Live Piracy Map which shows (as of 21 July 15) how busy the area has been: 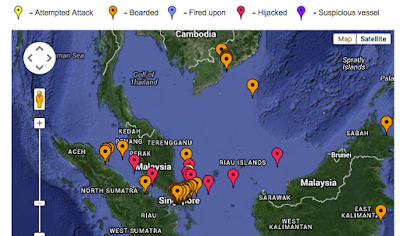 Since the Somali pirates have gone to ground, the area off the Somali coast and in the Northern Indian Ocean has been very, very quiet. There has also been a slowdown in West African activity, as seen (as of 21 July 15) by this extracted map:

The IMB and the folks at its Piracy Reporting Center who keep track of this stuff do a great job, and deserve much credit for helping to prompt counter-piracy activity around the world in recent years.

The U.S. Navy's Office of Naval Intelligence also does a nice job of keeping track of piracy and other threats to shipping here. Their Worldwide Threats to Shipping report is very extensive, as evidenced by these recent entries from West Africa:


UNCLASSIFIED
F. (U) WEST AFRICA:
1. (U) TOGO: On 14 July, near position 06:07 N -001:16 E, Lome Anchorage, the deck watch of an anchored container ship noticed a wooden boat with five individuals and no lights circling the vessel with the intention of climbing on board. Alarm was raised, crew was mustered and all exterior lights turned on. Seeing crew alertness
the occupants of the boat aborted their approach and moved away. No weapons were sighted. Togo Navy informed. (MTISC-GOG)
2. (U) NIGERIA: On 9 July, seven gunmen in two speedboats opened fire on the passenger vessel MV TARI while conveying passengers from Port Harcourt in Rivers State to Okpoama community in Bayelsa State. One person was killed in the attack and two persons, including the vessel’s master, were kidnapped. (nationalmirroronline.net)