Attacks from the Sea on Cruise Ships, Tankers and Other Things

In researching questions for Captain Bob Hein and our Midrats show Episode 330: Terrorists on the Ocean, I was struck by the number of incidents that ought to act as a warning that terrorist attacks are already being made.

I include 3 Hollywood movies, one based on a real event, the others, well, food for thought.

I'm sure with time I can add many, many more. 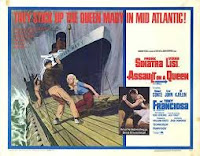 Assault on a Queen


A computer hacker breaks into the computer system of the Seabourn Legend cruise liner and sets it speeding on a collision course into a gigantic oil tanker.

The Hijacking of the Achille Lauro

The story of the hijacking of the Itallian liner Achille Lauro by four militants of the Palestine Liberation Front, in 1985, who demanded the release of several Palestinians incarcerated in Israeli prisoners. On their hands, lies the fate of several passengers, many Americans included and among them, Jewish American businessman Leon Klinghoffer.

Attack on USS Cole. Midrats show with CO of Cole at time of attack Episode 121: Front Burner: The Attack on the USS COLE

A Guerilla War at Sea

A Worst Case Scenario: Guerilla Type War in the Littorals

According to officials, 116 of the 900 people onboard are now presumed to have died, although only 63 bodies have been recovered.

The report into the fire has now concluded it was caused by "an explosive device," national police spokesman Superintendent Leopoldo Bataoil said in a statement.

Investigators believe the Superferry was targeted because its owners, WG&A, refused a request for $1m in protection money from Abu Sayyaf in 2003 .