The South China Sea is not now, nor should it ever become, a Chinese "lake." 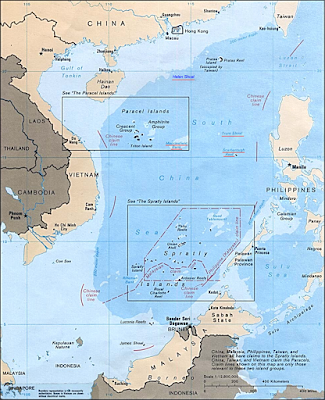 Allowing China to have its way in the region is not good for international commerce, surrounding nations and the bodes ill for further Chinese expansionism as it asserts some fabricated "historical usage" right to waters that it sailed in "once upon a time." That "once upon a time" ended hundreds of years ago when China, due to internal reasons, abandoned the high seas and ended its exploration of the world.

Now, however, having read Mahan and studied its position in the world, China has decided that its "manifest destiny" lies in invading both international waters and the domestic waters of its neighbors to force them into a world where their adjacent seas are dominated by Chinese warships (including its large, aggressive "Coast Guard") as well as by a militia force of fishing vessels. Why? To create a 'strategic strait'?


"The logical conclusion drawn from China's adding ... islands in the southern part of the South China Sea with military-sized runways, substantial port facilities, radar platforms and space to accommodate military forces is that China's objective is to dominate the waters of the South China Sea at will," Peter Dutton, professor and director of the China Maritime Studies Institute at the U.S. Naval War College, said in a February speech at London's Chatham House.

"Building the islands is therefore, in my view, a significant strategic event," he said. "They leave the potential for the South China Sea to become a Chinese strait, rather than an open component of the global maritime commons."


The proof of this Chinese approach is daily recounted in news reports of the shouldering or ramming non-Chinese fishing vessels, in the aggressive response of Chinese military forces to military aircraft and ships transiting in what the rest of the world recognizes as "international waters" but which the Chinese are intent on grabbing. See Dangerous rocks in the South China Sea from the Washington Post:


Having made a “rebalancing” toward Asia a pillar of his foreign policy, President Obama may face a fateful test from China in his final months in office. President Xi Jinping already broke a promise he made to Mr. Obama not to militarize islets his regime has been building up in two parts of the South China Sea. Now Beijing appears to be contemplating building a base on a contested shoal just 150 miles from Subic Bay in the Philippines. A failure by the administration to prevent this audacious step could unravel much of what it has done to bolster U.S. influence in the region.

Chinese development of Scarborough Shoal, a collection of rocks and coral reefs it seized from the Philippines four years ago, would escalate its already-belligerent behavior in the South China Sea in a number of ways. Until now, Beijing’s landfill work and construction of airstrips have occurred on islets it already controlled that are considerably closer to the Chinese mainland. Scarborough Shoal lies about 500 miles from China. A base there could allow Chinese radar and missiles to threaten Manila, as well as Philippine bases where U.S. forces are positioned.

Perhaps most importantly, the Chinese venture would concretize Beijing’s refusal to abide by international law in resolving territorial disputes with its neighbors.

The nations surrounding the South China Sea (SCS) are either arming themselves or inviting allies to "come back" and show a level of possible force.

One response of the United States has been to sail naval vessels into the SCS and conduct "Freedom of Navigation Operations" or "FONOPS."

These SCS FONOPS are discussed in a National Interest article by Zack Cooper and Bonnie S. Glaser, How America Picks Its Next Move in the South China Sea which describes the U.S.'s tiptoeing in and around the Chinese island building and aggression in the SCS. This is certainly a nice, nuanced approach to the situation, sending signals that are meant to warn the Chinese but without raising the stakes too high.

As noted in several of the links above, China and the Philippines are awaiting a ruling from from an arbitration panel over the Chinese claims to the SCS - a ruling China has already denounced, despite many good reasons why it shouldn't.

As was discussed during one of the Midrats podcasts, Episode 321: The Year of the Monkey in the South China Sea w/Toshi Yoshihara (starting about 16:21), China views international law as not being binding because, it does not reflect Chinese "traditions." but rather "Western legal traditions" because of differing historical perspectives - China wants to start with "history first" as Dr. Yoshihara expressed it.

History may not be "bunk" but certain "historical events" are completely ignored by the Chinese as the make their claims, including World Wars I and II, and the last 70+ years of free access to the seas granted to the Chinese around the world brought to them courtesy of the Western world, especially by the U.S. and its allies.

When China was building up its large merchant shipping force, who was protecting freedom of the seas?

Hint - it wasn't the Chinese navy.

If any country could have made the SCS into a "lake" it would have been the U.S. following WWII - but which, instead, backed out of the area.

China, not content with a free sea, is trying to fill what it perceives as a void and is not getting much in the way of push-back.

It's time the international community did something stronger than FONOPS, which are weak tea at best.

My modest proposal is to send a properly modified self-propelled drilling rig into the area and have it anchor itself at or near one of those SCS rock formations that China claims but which are generally not uncovered by the sea. Man the thing with scientists who ought to be screaming their heads off about the changing of the ecological state of the SCS by the Chinese island building campaign. Fly the UN flag. Support it from the Philippines, Singapore, Malaysia, Indonesia, Vietnam and
any other SCS stakeholders.

In short, it is time to quit playing soft games with the Chinese and move to hardball. Time to challenge every encroachment. Time to move to a higher level of activity. Time to increase the signal strength, if signaling is still needed.

Use this "sea base" as the locus of naval exercises involving those stakeholders and Aussies, Japanese, South Koreans and anyone else who chooses to play - except the Chinese.

Time to re-look at building up Midway? Wake Island?