Gulf of Guinea Sea Kidnappers and Ransom Seekers: A Suggested (Historical) Method of Dealing with Them 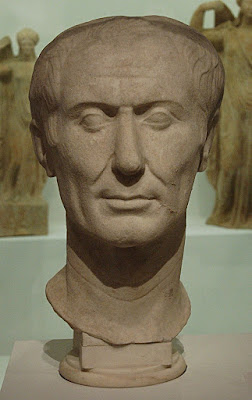 From A GENERAL HISTORY OF THE PYRATES


In the Times of Marius and Sylla, Rome was in her greatest Strength, yet she was so torn in Pieces by the Factions of those two great Men, that every Thing which concerned the publick Good was altogether neglected, when certain Pyrates broke out from Cicilia, a Country of Asia Minor, situate on the Coast of the Mediterranean, betwixt Syria on the East, from whence it is divided by Mount Tauris, and Armenia Minor on the West. This Beginning was mean and inconsiderable, having but two or three Ships, and a few Men, with which they cruised about the Greek Islands, taking such Ships as were very ill arm’d or weakly defended; however, by the taking of many Prizes, they soon increased in Wealth and Power: The first Action of their’s which made a Noise, was the taking of Julius Cæsar, who was as yet a Youth, and who being obliged to fly from the Cruelties of Sylla, who sought his Life, went into Bithinia, and sojourned a while with Nicomedes, King of that Country; in his Return back by Sea, he was met with, and taken, by some of these Pyrates, near the Island of Pharmacusa: These Pyrates had a barbarous Custom of tying their Prisoners Back to Back and throwing them into the Sea; but, supposing Cæsar to be some Person of a high Rank, because of his purple Robes, and the Number of his Attendants, they thought it would be more for their Profit to preserve him, in hopes of receiving a great Sum for his Ransom; therefore they told him he should have his Liberty, provided he would pay them twenty Talents, which they judg’d to be a very high Demand, in our Money, about three thousand six hundred Pounds Sterling; he smiled, and of his own Accord promised them fifty Talents; they were both pleased, and surpriz’d at his Answer, and consented that several of his Attendants should go by his Direction and raise the Money; and he was left among these Ruffians with no more than 3 Attendants. He pass’d eight and thirty Days, and seemed so little concerned or afraid, that often when he went to sleep, he used to charge them not to make a Noise, threatening, if they disturbed him, to hang them all; he also play’d at Dice with them, and sometimes wrote Verses and Dialogues, which he used to repeat, and also cause them to repeat, and if they did not praise and admire them, he would call them Beasts and Barbarians, telling them he would crucify them. They took all these as the Sallies of a juvenile Humour, and were rather diverted, than displeased at them.
At length his Attendants return’d with his Ransom, which he paid, and was discharged; he sail’d for the Port of Miletum, where, as soon as he was arriv’d, he used all his Art and Industry in fitting out a Squadron of Ships, which he equipp’d and arm’d at his own Charges; and sailing in Quest of the Pyrates, he surpriz’d them as they lay at Anchor among the Islands, and took those who had taken him before, with some others; the Money he found upon them he made Prize of, to reimburse his Charges, and he carry’d the Men to Pergamus or Troy, and there secured them in Prison: In the mean Time, he apply’d himself to Junius, then Governor of Asia, to whom it belonged to judge and determine of the Punishment of these Men; but Junius finding there was no Money to be had, answered Cæsar, that he would think at his Leisure, what was to be done with those Prisoners; Cæsar took his Leave of him, returned back to Pergamus, and commanded that the Prisoners should be brought out and executed, according to Law in that Case provided; which is taken Notice of, in a Chapter at the End of this Book, concerning the Laws in Cases of Pyracy: And thus he gave them that Punishment in Earnest, which he had often threatned them with in Jest. (emphasis added) 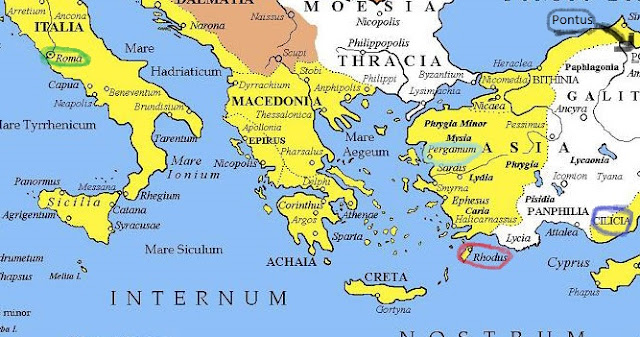 Image source and explanation, for which I am thankful, 20? MAKE IT 50!:


Green = Rome;
Red = Rhodes (where Julius Caesar finally arrived to study after his adventures with the pirates);
Blue = Cilicia (Where the pirates came from);
Light Blue = Pergamon (Where the pirates were brought to justice);
Black = Pontus (The nation that fought Rome several years back making Cilicia a great place for piracy!)