"Tens of countries sign up to shut pirate fishers out of their ports" reports The Guardian's Emma Bruce:


. . . a momentous new treaty, led by the Food and Agricultural Organisation (FAO), aims 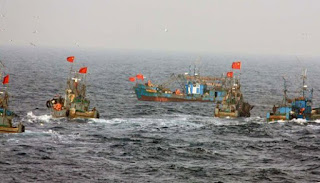 to shut down this convenient network. Known as the Port State Measures Agreement (PSMA), the treaty, which comes into full force on 5 June, requires signatory countries to inspect or stop suspicious fishing vessels from entering their ports. Under the banner of the rule, countries that have signed now hold a legal obligation to, quite literally, leave illegal fishers out in the cold.

Over the past several years, the effort to get the treaty ratified has been quietly ticking away in the background, as countries have been slowly adding their names to the list of signatories. Recently, a spate of newcomers—Gambia, Sudan, Thailand, and Tonga among them—pushed the number above the 25 required to bring the treaty into force. And last week it reached 30 signatories, a total that includes the United States, and the European Union, which counts as one entity.

The PSMA completely changes the focus of enforcement. Whereas in the past, the battle against pirate fishing has been fought predominantly on the waves, requiring huge resources, manpower, and time to track mostly elusive pirate fishers, this new rule turns ports into the first line of defence.

Gee, I wonder what country's fishing fleet is the biggest violator of such fishing laws?


Some 294 Chinese fishing boats and 2,905 Chinese fishermen have been caught so far this year illegally fishing in Korean territorial waters.


South Africa’s navy has detained three Chinese ships with around 100 crew on board on suspicion of illegal squid fishing, officials said on Monday.

The ships were spotted on Friday having entered South Africa’s 200 nautical mile economic exclusion zone without permits. When South African officials asked the ships to sail to port they attempted to flee but were eventually captured.

“We cannot tolerate the plundering of our marine resources, which are a source of food security,” Agriculture and Fisheries Minister Senzeni Zokwana said in a statement.

“We are also looking into the sudden influx of these vessels in our waters.”

The three vessels – Fu Yuan Yu 7880, Fu Yang Yu 7881 and Run Da 617 – had a combined total of almost 600 tonnes of squid when the navy escorted them to shore. Inspectors found all three ships had no permits to fish locally.

The Chinese lack respect for other people's property while loudly proclaiming non-existent rights for themselves.