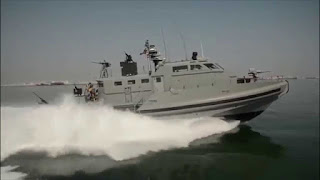 As reported by Defense News here


"The Mark VI patrol craft can go up to speeds in excess of 35 knots and has a robust communications system, nine weapons platforms, including three remotely operated systems that are two .50-caliber machine guns up top, and a 25mm cannon up front," Weinreb said at a preview of the boat at the 5th Fleet base in Bahrain.


***
The MkVI is the Navy’s first true patrol boat, larger than riverine craft, introduced since the mid-1980s. The Navy operated a large number of small riverine craft and Swift boats in Vietnam during the 1960s and early 1970s. It also operated some Norwegian-built Nasty-class patrol boats — similar in design to World War II-era PT boats — in support of special operations
forces in Vietnam and later.
***
The MkVI is a variant of SAFE Boats’ 780 Archangelclass patrol boat, which has been in service since 2005 and currently serves in the navies of more than a
dozen nations. It has an overall length of 85 feet anda waterline length of 78 feet, and is powered by twin diesel engines driving water jets. The boat is able to
reach speeds of 35 knots and has a range of 600 nautical miles.

The boat features a pilothouse, flying bridge and main-deck cabin. The pilothouse is configured with
shock-mitigating seating with integrated work stations for the crew. The climate-controlled cabin has berthing, galley and head/shower facilities for the crew to
endure extended operations.

The Mark VI is heavily armed for a boat of its size, with two BAE Systems-built remote-controlled Mk38 Mod2 25mm Bushmaster rapid-fire cannons, plus two stabilized small-arms mounts and multiple crew-served weapon mounts.
***
The Navy is incorporating some upgrades in the MkVI.

“The MkVI PB has incorporated two emerging requirements, an unmanned underwater vehicle launch-and-recovery system and a wideband satellite communications system,” Rozicer said. “Both systems provide the MkVI PB broader capability in the mine countermeasures mission area and communications with other nearby Navy assets.”