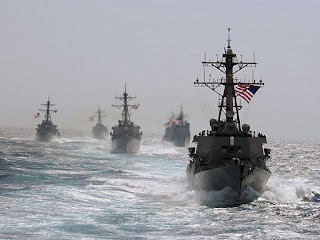 Even before the election, President-elect Trump mentioned he wanted to get to a 350 ship Navy. The outgoing Secretary of the Navy has put us on a path to 308, and in his waning months is fighting a holding action on the shipbuilding budget giving as good of a turnover in this area to his relief.

What are the viable paths to 350 we could see in the opening years of a Trump Presidency? How long could it realistically take? What would a fleet look like 5, 10 or 20 years down the road?

What will this fleet be built to do? Will we need new designs to meet the evolving maritime requirements of an eventual national strategy?

To discuss this and more Sunday from 5-6pm Eastern will be one of our favorite guests,

Dr. Jerry Hendrix, CAPT USN (Ret.), Senior Fellow and the Director of the Defense Strategies and Assessments Program at the Center for a New American Security.

His staff assignments include tours with the CNO’s Executive Panel, the Office of the Undersecretary of Defense for Policy, and the OSD Office of Net Assessment.

He has a Bachelor Degree in Political Science from Purdue University, Masters Degrees from the Naval Postgraduate School (National Security Affairs) and Harvard University (History) and received his doctorate from King’s College, London (War Studies). He has twice been named the Samuel Eliot Morison Scholar by the Navy Historical Center in Washington, DC, and was also the Center’s 2005 Rear Admiral John D. Hays Fellow. He also held the Marine Corps’ General Lemuel C. Shepherd, Jr. Fellowship. He authored the book Theodore Roosevelt’s Naval Diplomacy and received a number of awards, including the United States Naval Institute’s Author of the Year and the Navy League’s Alfred T. Mahan Award for Literary Achievement.

Email ThisBlogThis!Share to TwitterShare to FacebookShare to Pinterest
Labels: Midrats on Blogtalkradio, Midrats on iTunes, Midrats on Stitcher, U.S. Navy