On Midrats 18 Dec 2016 Episode 363: The South African Border War and its Lessons, with LT Jack McCain

Please join us at 5pm EST on 18 Dec 2016 for Midrats Episode 363: The South African Border War and its Lessons, with LT Jack McCain 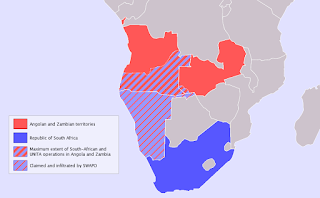 for over half the Cold War there was a simmering proxy war in southern Africa that involved, to one extent or another, the present day nations of Angola, Namibia, Zambia, and South Africa.

Over the course of time, it would involve nations from other hemispheres such as Cuba, and brought in to conflict two political philosophies of the 20th Century now held in disrepute in the 21st Century; Communism and Apartheid.

The last decade of the Cold War brought the conflict in fresh relief as part of the Reagan administration's push back against Communist aggression in South Africa, Central America, Afghanistan and elsewhere. Acronyms such as UNITA, and SWAPO were as well known then as AQAP and Boko Haram are now.

What does that relatively unknown conflict have to teach us about the nature of war today?

Our guest for the full hour to explore that answer will be Lieutenant Jack McCain, USN.

LT McCain is a helicopter pilot with operational experience in Guam, Japan, Brunei, the Persian Gulf, and the Western Pacific and is a graduate of the United States Naval Academy and Georgetown University’s School of Foreign Service. He is currently assigned as an instructor at the U.S. Naval Academy.

The opinions he expresses are his own and represent no U.S. government or Department of Defense positions.