A spin-off from Fibber McGee and Molly, in which Gildersleeve, played by Harold Peary, often was a foil to Fibber's machinations, but the payoff was a standalone show, The Great Gildersleeve: 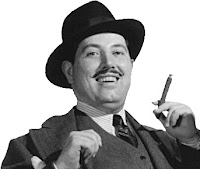 In Fibber McGee and Molly, Peary's Gildersleeve had been a pompous windbag and antagonist of Fibber McGee. "You're a haa-aa-aa-aard man, McGee!" became a Gildersleeve catchphrase.
***
"Gildy" grew so popular that Kraft Foods—promoting its Parkay margarine—sponsored a new series featuring Peary's somewhat mellowed and always befuddled Gildersleeve as the head of his own family.

A great deal more on the series here, and a tip of the hat for the photo of Harold Peary above.