On Midrats 4 Dec 2016 Episode 361 - Where Youth and Laughter Go: With "The Cutting Edge" in Afghanistan

Please join us at 5pm EST on 4 December 2016 for Midrats Episode 361: Where Youth and Laughter Go; With "The Cutting Edge" in Afghanistan 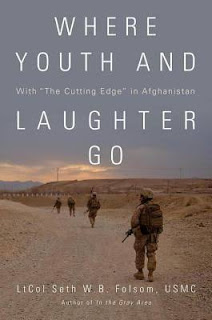 For the full hour this Sunday our guest will be Lieutenant Colonel Seth W. B. Folsom, USMC the author of Where Youth and Laughter Go. Described by USNI Books:


Where Youth and Laughter Go completes LtCol Seth Folsom’s recounting of his personal experiences in command over a decade of war. It is the culminating chapter of a trilogy that began with The Highway War: A Marine Company Commander in Iraq in 2006 and continued with In the Gray Area: A Marine Advisor Team at War in 2010.
***
The chronicle of Folsom’s command of 3rd Battalion, 7th Marine Regiment, “The Cutting Edge,” and his harrowing deployment to Afghanistan’s volatile Sangin District presents a deeper look into the complexities and perils of modern counterinsurgency operations in America’s longest war.

We will discuss not just his latest book, but also larger issues related to command, the nature of the war in Afghanistan, and the Long War.

Please join us live if you can or pick the show up later by clicking here.

You can also find the show later at our iTunes page here or on our Stitcher page here.