Getting the U.S. Navy numbers up faster, sooner while waiting for the longer lead-time construction discussed by Claude Berube and me over at The National Interest in Trump's Gunboats 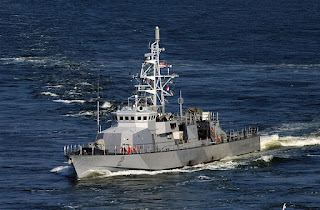 Instead of continuing to use the wrong tool for the job, it is logical to develop a diverse force of smaller naval ships to handle numerous, smaller missions, leaving the blue water navy to pursue the larger, vital warfighting role that it was designed to do. Smaller navy vessels working in squadrons may be more cost-effective in responding to global maritime incidents, patrolling coasts, and deterring similar forces.


The U.S. Navy is getting ready to "swarm" its adversaries.

The Office of Naval Research over the weekend released video of tests conducted in August that showed five "drone" boats swarming a vessel that posed a threat to a Navy ship.
"The U.S. Navy is unleashing a new era in advanced ship protection," the service says in the video.