Ah, Iran - never give up a chance to spread misonformation - for example, there is this report about a new Iranian drone, "Iran's Ground Force Unveils New Drone during Massive Drills", featuring this impressive photo, which one might assume is of their new toy: 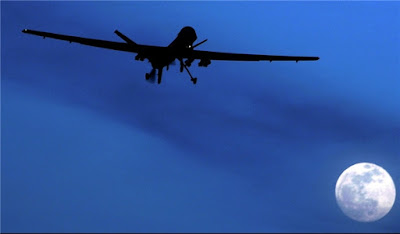 Well, no, actually it's a photo of a U.S. Predator drone taken by AP's Kirsty Wigglesworth as set out here.

By the way, the "hand launched" Iranian drone is somewhat limited:


The Iranian Ground Force unveiled a new drone named 'Farpad' during the massive wargames codenamed 'Mohammad Rasoulallah (PBUH) 4' in the Southeastern parts of the country on Monday morning.
The hand-launched drone is run by autopilot and can fly maximum 45 minutes to the range of 20km.

More on the incredible awesomeness of the Iranian wargames here and here. While interesting on several levels, the war games seems mostly to demonstrate a target rich environment. But every country is entitled to practice some sort of self-defense, I suppose.

Of more concern is the Iranian support of Syria with both troops and logistics and its influence in Iraq. Now, if they want to talk about those things, it would be interesting. See Long War Journal for examples:


According to the Saudi newspaper Asharq al Awsat, 80 Iranian military advisors have joined the operation in Fallujah to support the militias in the Iranian-backed Popular Mobilization Forces. At least two members of the Islamic Revolutionary Guard Corps (IRGC) Basij paramilitary have been killed as a result of injuries sustained near Fallujah in the past two months. But there have been no announced casualties of Iranians since the operation to retake Fallujah commenced two weeks ago.