Possible Attack on Oil Tanker Near Strait of Hormuz 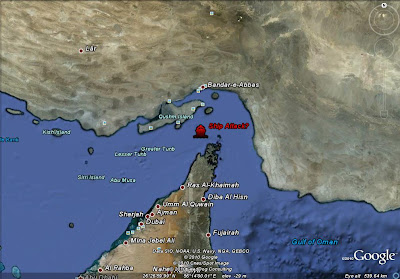 The degree and details of hull damage are currently under investigation but no serious injury was reported, although one of the crew was slightly injured, and no oil leaked from the hull.
Further, M. STAR continues her voyage, making for the UAE port of Fujairah, where the damage and its causes will be thoroughly investigated. 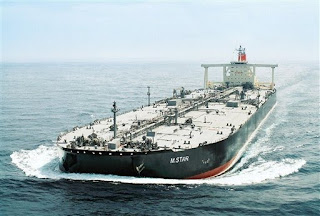 M. STAR took on crude oil Tuesday, July 27, at the UAE Port of Das Island, after which it departed for Chiba Port in Japan. 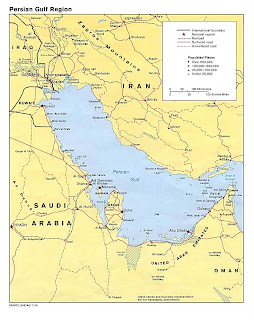 There was an explosion on the starboard side of the ship, which damaged some hatches and one of the lifeboats, said Corey Barker, a spokesman for the U.S. Fifth Fleet, speaking by phone from the fleet’s base in Manama, Bahrain. “The cause and extent of the damage is unknown and will be investigated,” he said.

Info on the Strait of Hormuz here:


Located between Oman and Iran, the Strait of Hormuz connects the Persian Gulf with the Gulf of Oman and the Arabian Sea. Hormuz is the world's most important oil chokepoint due to its daily oil flow of 16.5-17 million barrels (first half 2008E), which is roughly 40 percent of all seaborne traded oil (or 20 percent of oil traded worldwide). Oil flows averaged over 16.5 million barrels per day in 2006, dropped in 2007 to a little over 16 million barrels per day after OPEC cut production, but rose again in 2008 with rising Persian Gulf supplies.

At its narrowest point the Strait is 21 miles wide, and the shipping lanes consist of two-mile wide channels for inbound and outbound tanker traffic, as well as a two-mile wide buffer zone. The majority of oil exported through the Strait of Hormuz travels to Asia, the United States and Western Europe. Currently, three-quarters of all Japan’s oil needs pass through this Strait. On average, 15 crude oil tankers passed through the Strait of Hormuz daily in 2007, along with tankers carrying other petroleum products and liquefied natural gas (LNG).

UPDATE: In a weird way, Iran rules out terrrorism:

The Managing Director of Iranian Navigation and Ports Organization on Wednesday rules out the possibility of terrorist attack on a Japanese tanker in Persian Gulf, the semi-official Mehr news agency reported.
"Probably the earthquake has caused such an incident," Ataollah Sadr was quoted as saying.
Talking to Mehr about the blast in Japanese oil tanker, Sadr rejected the possibility of any terrorist attack on the tanker, saying "due to the presence of some inflammable steams and gases on the oil tankers, the possibility of blast cannot be ruled out."
"Based on the dialogues and messages heard from Maritime Rescue Coordination Center (MRCC), there has been news about the quake occurrence," Sadr said, referring to the Japanese oil tanker M. Star blasted near the Strait of Hormuz on Wednesday, leaving one person slightly injured.