Interesting post on how Ecaudor's new "open immigration" policy may pose a risk to the U.S. and Canada at "How Ecuador's immigration policy helps al Qaeda" at Shadow Government:


The government of Ecuador has once again crossed the line between irresponsible policies and ideologically driven actions that have created a serious security problem not only for its citizens but also for the entire Western Hemisphere. The disarray created in Ecuador's immigration policy has permitted transnational criminal organizations and terrorist groups -- possibly including al Qaeda -- to potentially use the country as a base of operations with the ultimate objective of harming the United States.
*** 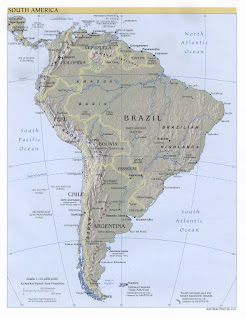 While there is no evidence to show that the Correa government established the policy of "open borders" in an effort to attract criminal organizations, that has been the result. On the other hand, there is no evidence of Correa wanting to stem the flow. These examples show how Rafael Correa's Ecuador is becoming a failed state, hosting all sorts of dangerous actors. They also help to understand the context in which various financial, commercial, and energy agreements are being developed by Ecuador with the governments of Iran, Cuba, and Venezuela.