Well, it really is unbelievable but according to Iran's PressTV ""Iran's Navy successfully stops another piracy take over" after a 36 hour sea battle, etc, etc.

According to the Admiral, in the past three years Iran has escorted over 1500 ships safely in the Indian ocean and has reduced the fighting with pirates from 100 to 44.

I'm sure I lost something in the translation but I have no idea what the last sentence means.


As I said - unbelievable!!

UPDATE: In fairness to the admiral and because the reporting is so poor, there probably are 19 warships and close to 11,000 men and women serving in the IO. It's just that they aren't Iranian Navy ships or men (and especially not Iranian women). I also think that the 100 to 44 reduction refers to the overall incidence of pirate attacks in the region.

Your estimates of Iran's role in reducing these attacks may vary.

UPDATE2: No, I have no idea what the IMO "strategic defense award" is or how Iran got it, if it did. But I would be happy to learn about it in the comments.

More information from the Tehran Times: 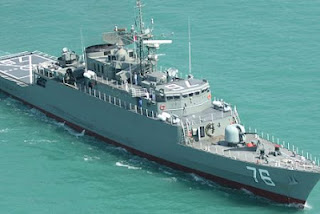 Speaking at a press conference, Sayyari said that the pirates were captured 3000 kilometers off Iran’s shorelines in the Indian Ocean.

The pirates had attacked an Iran-bound commercial ship, which was carrying 10,000 tons of goods, but Iranian naval forces, in a special operation on March 30 and 31 which lasted 36 hours, managed to foil the attack and capture the pirates, Sayyari explained.

The Navy used the Jamaran destroyer in the operation.

The Jamaran is the first domestically manufactured destroyer, which can carry helicopters and is equipped with torpedoes.

The pirates have been transferred to Iranian soil.