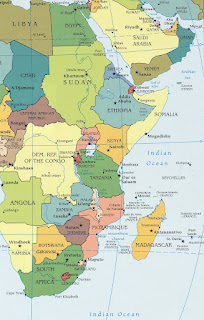 “In the end, it seems clear that a loud message has gone out that SANDF forces, as part of SADC armed forces, will not allow illegal activities within SADC waters,” the Navy said in a statement. “It is also clear that the Tripartite agreement between South Africa, Mozambique and Tanzania, and the subsequent deployment of SADC forces to safeguard our sea lanes, is paying off dividends in ensuring the safety of our seafarers and their precious cargoes. To the sailors and air crew of the SAS Drakensberg, the operational planners of Chief of Joint Operations and all others involved; we salute your valiant efforts!”

A trilateral agreement was signed by South Africa, Mozambique and Tanzania in February this year, allowing the three countries the right to, among other things, patrol, search, arrest, seize and undertake hot pursuit operations on any maritime crime suspect. In accordance with the trilateral agreement, this allows the SA Navy to patrol as far as Tanzania.


"The pirates arrested in Tanzania were in close communication with a mother ship that has seven more pirates. A Spanish vessel has managed to arrest the pirates on this mother ship and they are being brought to Tanzania today for custody."

Mgawe said the mother ship used by the pirates was formerly a Sri Lankan fishing vessel with six crew members on board.

"The Tanzanian navy has been conducting regular patrols to ensure Somali pirates do not enter our territorial waters from deep seas to carry out attacks," he said.


UPDATE2: EUNAVFOR report on the rescue of the crew of the pirated "mother ship" from here:


On Wednesday 18 April, EU Naval Force (EU NAVFOR) Spanish warship, ESPS Infanta Elena rescued 6 Sri Lankan fishermen and their fishing vessel from 7 suspected pirates. The fishing vessel had been in the hands of suspect pirates since November 2011 and was reportedly being used as a mother-ship to launch attacks against merchant shipping in the region.

At sunset on 18 April, 50 miles off the coast of Tanzania, ESPS Infanta Elena identified the pirated vessel and after closing its position, the Spanish boarding team went on board. Once there, they identified the 7 suspected Somali pirates and 6 Sri Lankan crew. The men received much needed medical care and were provided food and water. Earlier the same day, 5 suspect pirates had been arrested by Tanzanian maritime forces when their attack skiff, believed to have been operated from the Sri Lankan vessel, beached on the Tanzanian coast.

The tired, but very relieved Sri Lankan fishermen were handed over to Tanzanian maritime forces close to Dar Es Salaam on 21 April and the European Union, via its delegation in Tanzania helped to ensure that the crew could quickly make contact with their families. Arrangements are now being made to fly the fishermen home to Sri Lanka.

As there is currently no agreement on the transfer of suspect pirates between the European Union and Tanzania, the suspect pirates were released by ESPS Infanta Elena to the Somali coast on Monday 23 April. With the on-going negotiations with the Tanzanian authorities, it is hoped that a transfer agreement will be in place in the near future.