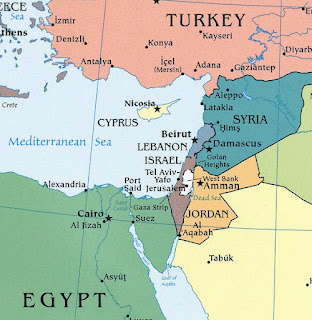 The Jerusalem Post reports "IDF boards ship allegedly smuggling arms to Gaza", the IDF being the Israel Defense Force. The ship being identified as a Liberian-flagged ship named HS Beethoven:


Commandos from the navy’s Flotilla 13 unit boarded a cargo ship, the HS Beethoven, in the Mediterranean Sea on Sunday night on suspicion it was trying to smuggle weapons to the Gaza Strip. The ship, which was flying a Liberian flag, was intercepted by Israel Navy vessels approximately 260 km. from Israel’s coast. Commandos boarded the ship with the captain’s consent and began searching cargo containers for arms.

It appears from the body of the article that the headline is misleading. The vessel might be suspected of attempted smuggling of weapons, but it is not "allegedly smuggling" such items until such weapons are found aboard the ship, which it appears, as of the time the report, had not happened, though I suspect that an intelligence source put the alert out on this vessel.