Strategy in Southeast Asia and Australia: The U.S. Marines Land 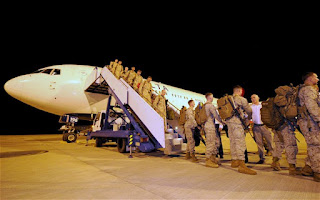 An Australian Broadcasting Corporation look at the strategic move of sending in the Marines to the Northern Territory.
A continuation of a 60 year alliance and a message.

ALAN DUPONT, INT. SECURITY STUDIES, UNSW: It's not so much the Marines themselves but it's the symbol - the signal it sends to the region that Australia is - and the United States are working together to meet these common challenges. So I think it's quite an important shift.


Were the United States not now to turn to the Indo-Pacific, it would risk a multipolar military order arising up alongside an already existent multipolar economic and political order. Multipolar military systems are more unstable than unipolar and bipolar ones because there are more points of interactions and thus more opportunities for miscalculations, as each country seeks to readjust the balance of power in its own favor. U.S. military power in the Indo-Pacific is needed not only to manage the peaceful rise of China but also to stabilize a region witnessing the growth of indigenous civil-military post-industrial complexes.


The Los Angeles-class fast-attack submarine USS Louisville (SSN 724) arrived in Malaysia April 3 for a visit as part of its deployment to the western Pacific.

Louisville moored alongside USS Emory S. Land (AS 39) to receive tended support for [sic- from?] the submarine tender.

"We anticipate performing a variety of submarine support services for Louisville to ensure all systems are fully functioning and operational when she returns to sea," said Lt. Cmdr. James Hicks, Emory S. Land's production maintenance officer.

Measuring more than 360 feet long and weighing more than 6,000 tons when submerged, Louisville is one of the most advanced and stealthiest attack submarines in the world. Louisville uses her stealth, mobility, endurance, and firepower to perform missions in undersea warfare, surface warfare, strike warfare, mine warfare, battlespace preparation including intelligence surveillance and reconnaissance, and combat search and rescue.