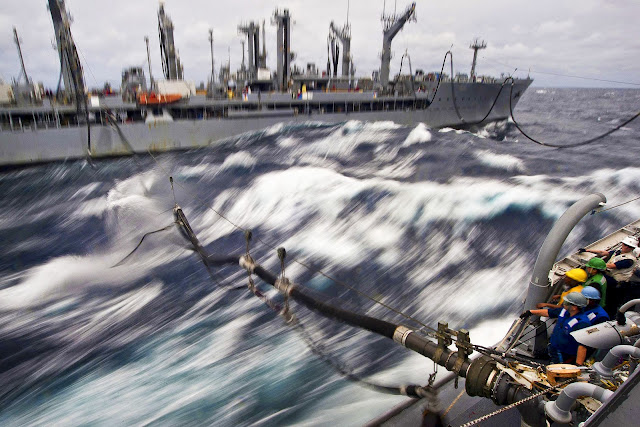 Not a surprise to me, but it might be to some others, as the Oil and Gas Journal reports on some Rand reports, "Rand studies question synfuels' role in meeting military needs":

Proponents contend that biofuels and other synthetics can provide US military services an alternative with fewer environmental impacts than crude oil and products from politically unstable suppliers. Prices also would not be as volatile, they add.

But Rand researchers concluded in the June 19 reports that alternative liquids do not offer DOD a way to appreciably reduce fuel costs.

Rand press release, with links to reports covering the topic, can be found here:


"While the Department of Defense is one of the world's largest fuel users, its consumption of about 340,000 barrels per day is a small fraction—less than one-half of one percent—of global petroleum demand," said James Bartis, a RAND senior policy researcher and the author of the first volume. "Considering that the United States produces more than 8 million barrels of oil per day domestically, there is no credible scenario in which the U.S. military would be unable to access the supplies of fuel it needs to defend the nation."

The report emphasizes that future oil prices cannot be predicted. "Too often military planners are afflicted with petroleum anxiety," Bartis said. "They think prices are heading in only one direction: up. But history teaches us otherwise."

Bartis said that although the military will have access to the wholesale fuel supplies that it needs, the purchase price could be uncomfortably high. The study finds that as fuel consumers, the military services have only one effective option to deal with high petroleum prices: use less fuel.

This can be done by purchasing more energy-efficient equipment, by adopting maneuver schemes that are more energy efficient and, in the short term, by implementing other energy conservation measures. The studies find that alternative liquid fuels do not offer the Department of Defense a way to appreciably reduce fuel costs.

Not the first time Rand has take this position, see Background: "Biofuels of No Benefit to Military" says Rand. Navy rejects report.  SECNAV Mabus was directly asked about that earlier Rand report during a DoD Bloggers Roundtable as set out in An Unimportant Navy News Release (yes, it's there, you just have to keep reading) and again rejected it.

I suspect SecNav won't like this collection of reports much, either.

Some in Congress, on the other hand, already know that bio-fuels is a money pit, since they already acted see Slicing the Baloney: Congress Stalls Expensive Navy Bio-Fuels Project

Email ThisBlogThis!Share to TwitterShare to FacebookShare to Pinterest
Labels: Fueling the Military